Last year, I wrote about Passaic Animal Shelter’s pitiful performance in 2016. Specifically, I wrote about the shelter’s high kill rate, the many healthy and treatable animals the facility killed and the various policies that resulted in these outcomes.

Did Passaic Animal Shelter improve in 2017? Did the shelter continue to kill many healthy and treatable animals? 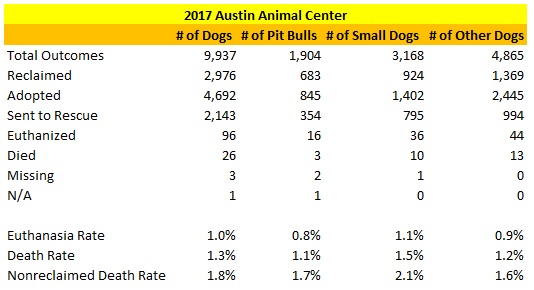 Passaic Animal Shelter also killed large numbers of cats. You can read the actual records here. Overall, 26% of the 274 cats who were impounded during 2017 lost their lives. 17% of neonatal kittens (under 6 weeks old), 17% of older kittens (6 weeks to under 1 year) and 48% of adult cats (1 year and older) failed to leave the shelter alive. Simply put, Passaic Animal Shelter performed terribly for all types of cats.

To make matters worse, Passaic Animal Shelter killed dogs with empty kennels. The Passaic Department of Health’s August 25, 2017 inspection report (11 dogs at facility) and Passaic Animal Shelter’s 2017 Shelter/Pound Annual Report (10 dogs and 8 dogs at facility on 1/1/17 and 12/31/17) indicate the shelter was not overflowing with dogs during the year since the 2017 Shelter/Pound Annual Report states the facility has a capacity of 12 dogs.

The shelter also killed cats when empty cages existed. The Passaic Department of Health’s August 25, 2017 inspection report (13 cats at facility) and Passaic Animal Shelter’s 2017 Shelter/Pound Annual Report (17 cats and 13 cats at facility on 1/1/17 and 12/31/17) indicate the shelter used less than half of its 35 cat capacity during the year.

Dog ID# D1 was a stray adult pit bull like dog that entered the Passaic Animal Shelter on January 3, 2017. The shelter labeled the dog “food aggressive” and killed him 24 days later despite having no bite history. Given that multiple studies have found food aggression tests unreliable and even the creator of one of the major food aggression tests has come out against using these evaluations, its amazing Passaic Animal Shelter would kill this dog for being food aggressive. Instead of killing these dogs, the creator of one of the major shelter evaluation methods recommends providing all adopters information on how to manage food aggression. 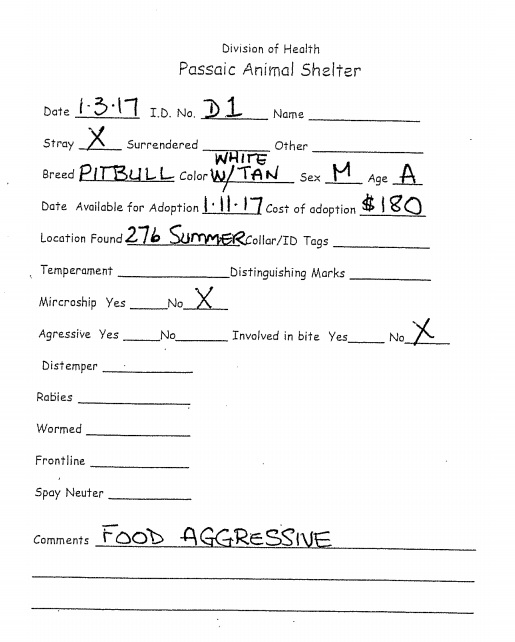 Dog ID# D65 was a stray adult pit bull that was brought to the Passaic Animal Shelter on June 17, 2017. Passaic Animal Shelter killed Dog ID# 65 just 13 days later on June 30, 2017 citing a failed temperament test even though the dog had no bite history. Scientific studies on shelter temperament testing prove these exams are completely unreliable. Even the ASPCA, which is not supportive of no kill policies created one of the major temperament tests, says “euthanasia decisions should not be based solely on a dog’s behavior during an assessment or in any other single situation unless the aggression is egregious” and “when the behavior has been reported by multiple sources.” Based on the shelter’s documents below, Dog ID# D65 did not display “egregious” aggression or have aggression “reported by multiple sources” and was not provided any form of behavioral rehabilitation. Thus, Passaic Animal Shelter killed Dog ID# 65 for convenience. 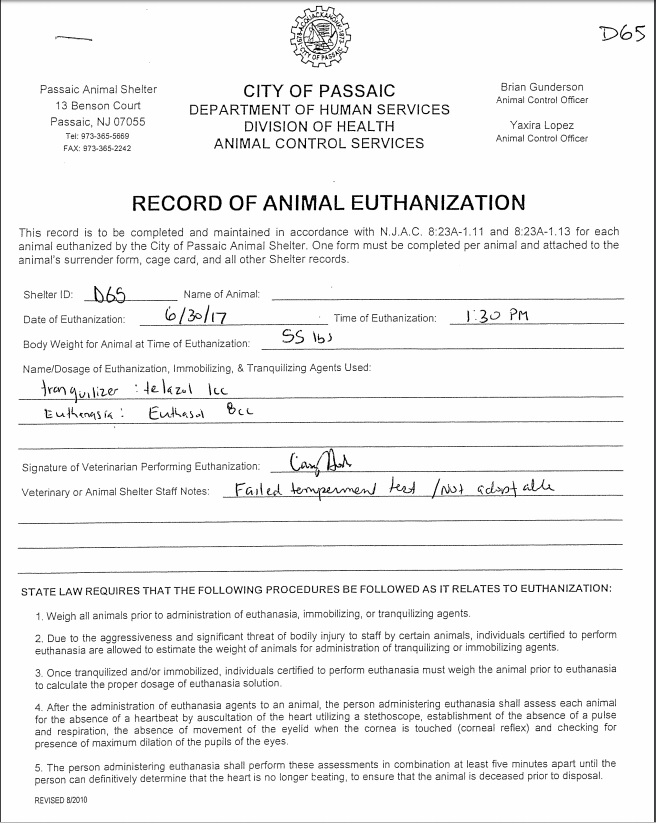 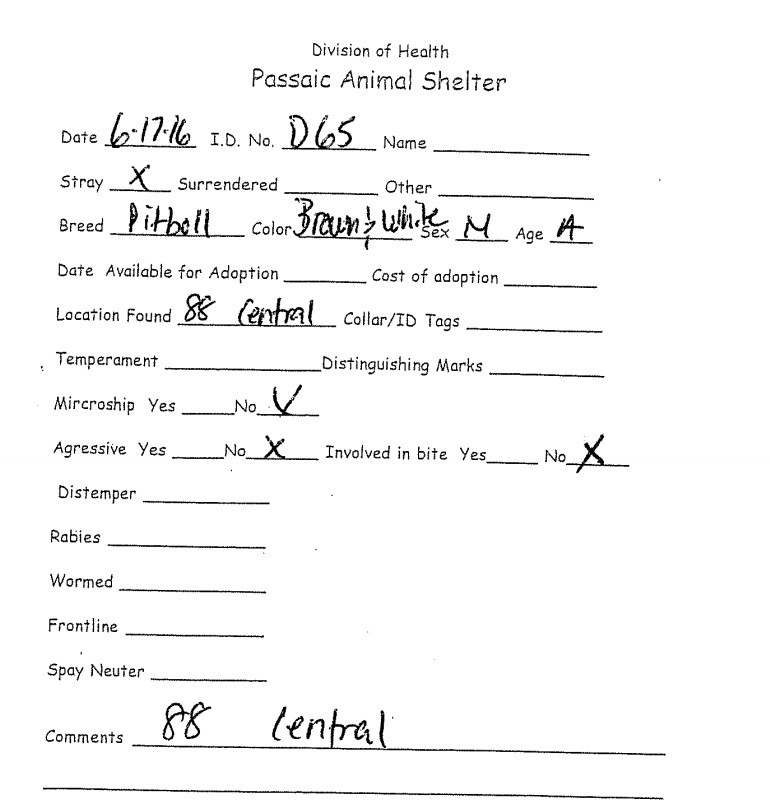 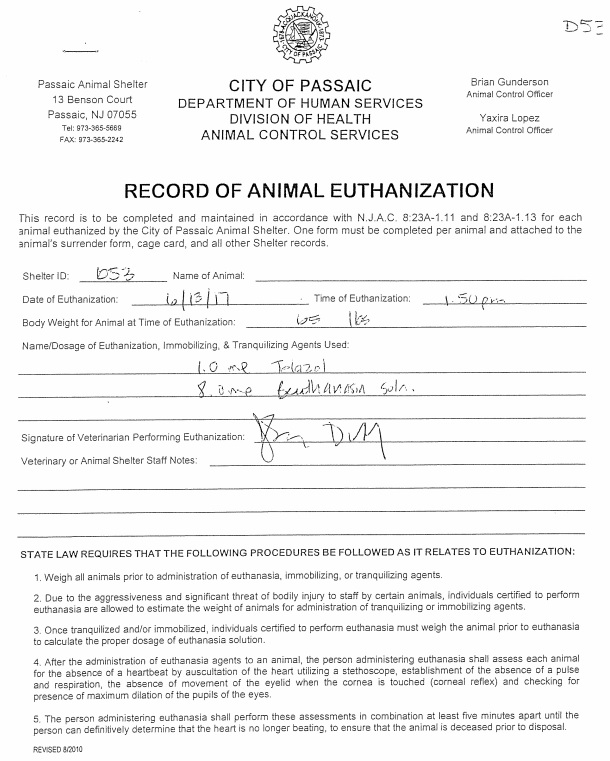 Passaic Animal Shelter killed cats using the reasons in the table below. Overall, the shelter most commonly killed cats for no documented rationale. Additionally, the facility often killed cats for exhibiting illnesses, such as Feline Panleukopenia that it could significantly reduce by vaccinating cats upon intake to the facility, using volunteers to provide enrichment (improves immune response to disease), cleaning the shelter properly, and reducing the animals’ length of stay in a good way. Also, the shelter killed a number of other cats with treatable medical conditions. Thus, Passaic Animal Shelter killed numerous cats for no reasons and preventable causes. 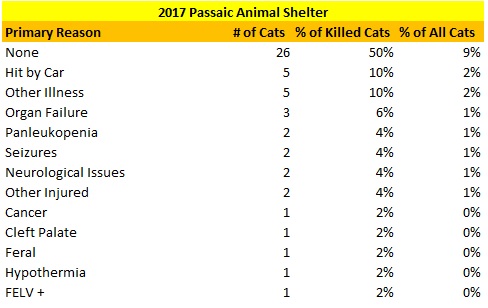 Samantha was a 3 year old cat released by her owner to the Passaic Animal shelter on March 27, 2017. Despite the cat being young and weighing a healthy 10 pounds, Passaic Animal Shelter killed Samantha just 10 days later citing no reason. 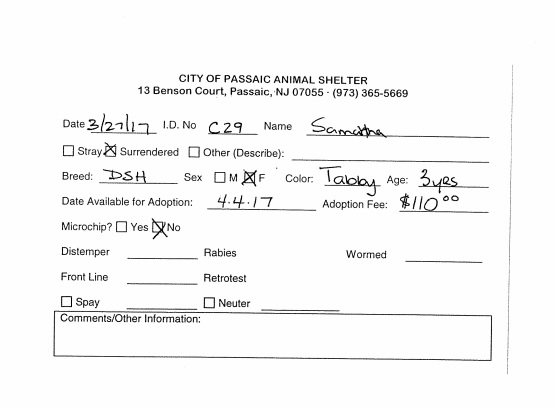 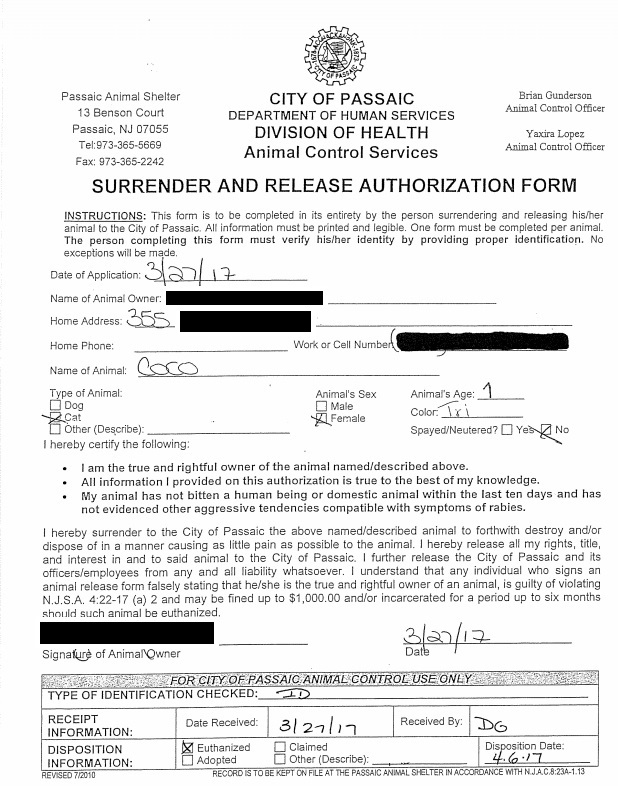 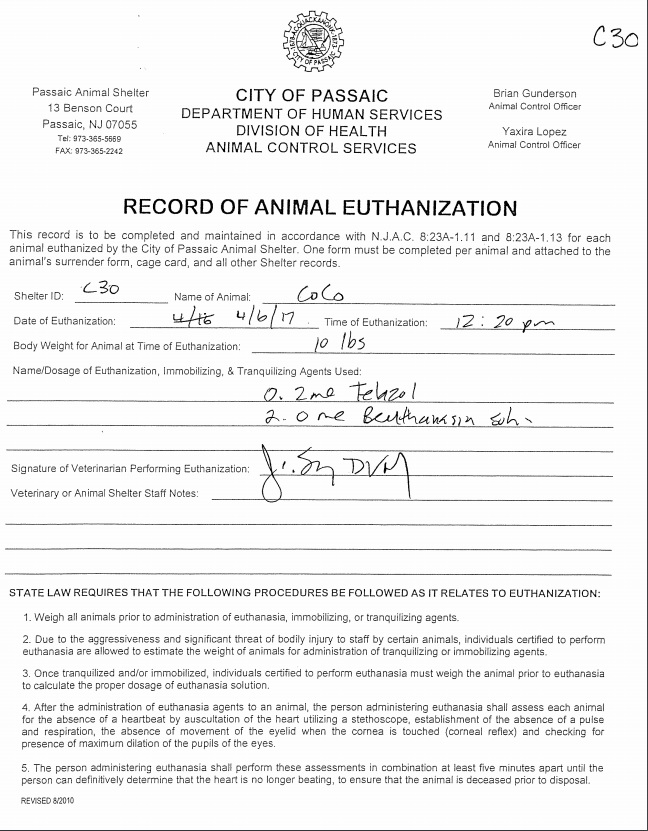 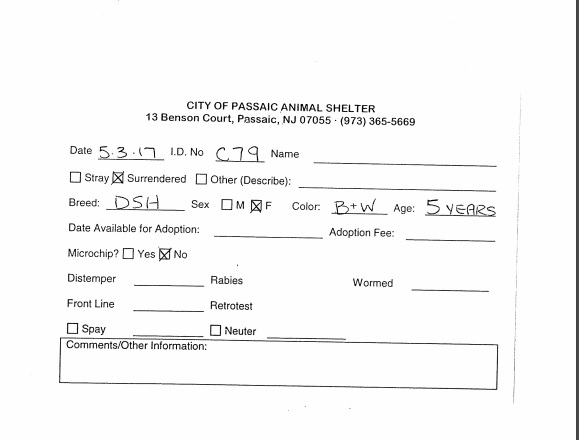 Passaic Animal Shelter rarely vaccinates animals upon intake. While Rutherford Animal Hospital vaccinates the shelter’s animals, it visits the shelter as little as twice a week. Since Rutherford Animal Hospital, and not anyone who works at the shelter, vaccinates animals, many dogs and cats, including ones carrying highly contagious diseases, will sit in the facility spreading disease until the outside veterinarian comes to the shelter. The UC Davis Koret Shelter Medicine Program clearly explains why shelters must immediately vaccinate animals to control diseases in their facilities:

When should the vaccine be given?

Immediately upon intake, if not sooner! In almost all cases, shelter animals should be vaccinated immediately upon intake. A delay of even a day or two will significantly compromise the vaccine’s ability to provide protection. In a cost saving effort, some shelters delay vaccination until the animal is made available for adoption, or even until it is adopted. While this does provide a service to adopters, the protective effect of the vaccine within the shelter is greatly reduced or eliminated. (In some cases, the chance of the vaccine preventing disease may be 90% or better if given the day before exposure, but will drop to less than 1% if given the day after exposure.) When possible, vaccination prior to intake is ideal (e.g. for owner surrendered animals or those returning from foster care).

Therefore, Passaic Animal Shelter’s vaccination program is ineffective and this may partially explain why the facility killed so many cats for illnesses and had so many other cats die.

The City of Passaic’s veterinary funding is inadequate. After we back out the cost of vaccines of approximately $15.53 per animal (based on $21.25 per adult dog, $27.25 per puppy, $9.25 per adult cat and $13.25 per kitten according the Maddie’s Fund’s Financial Management Tool) from the average $47.99 veterinary care fee per animal, Passaic Animal Shelter would have just $32.46 to treat each animal for all other illnesses and injuries. Clearly, that is not nearly enough to treat sick or injured animals. Given this fee also must cover the cost of killing, the city and Rutherford Animal Hospital have strong incentives to kill any animal where veterinary treatment may be costly or might not work. Thus, the contract’s financial terms encourage killing.

Shelter Makes Little to No Effort to Adopt Out Animals

Passaic Animal Shelter has little presence on the internet. At the time I’m writing this blog, Passaic Animal Shelter has just two cats and no dogs up for adoption on Petfinder and no animals listed for adoption on its Adopt a Pet web site. In fact, neither web site provides any information on how one can even adopt a pet from this facility. The shelter’s actual web site also does not list any animals up for adoptions and provides no details on how one can adopt a pet.

In other words, the shelter is just open four hours a week when working people could come in to adopt. Remarkably, the shelter is open just two hours for the entire weekend and is closed on Sundays. Does this look like a shelter that is working hard to save its animals?

Passaic Must Take a New Path

Clearly, Passaic Animal Shelter makes little to no effort to saving lives. After banning volunteers over a decade ago, the shelter no longer had anyone to make sure they tried to save lives. Instead, the shelter used its unilateral control to take the easy way out and kill animals needlessly. Why? The shelter’s leadership, within the facility, the Passaic Health Department, and its elected officials, simply found it easier to save a few animals and kill the rest. In fact, Passaic Animal Shelter’s “Animal Control Policy and Procedure Manual” explicitly states it will not run a no kill shelter.

Passaic residents must call Mayor Hector Lora at 973-365-5510 and make sure the mayor keeps the following promise he made:

This was about leaving a legacy for our children and (setting) an example for all.

Clearly, Passaic must set an example that taking the easy way out and killing homeless animals for convenience is unacceptable. Mayor Lora can leave a legacy for Passaic’s children by turning his shelter around and allowing his constituents and others to help him do so. Teaching children the value of life and hard work is priceless. Let’s help Mayor Lora understand this.