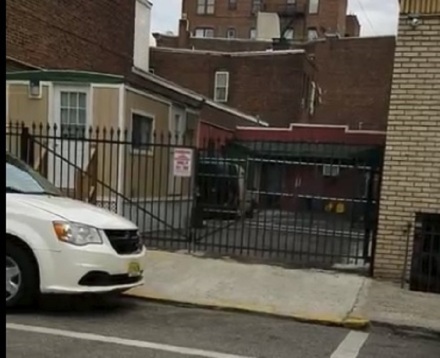 Late last year, Garfield animal activists erupted in anger when the city replaced its existing animal control and sheltering provider with New Jersey Animal Control and Rescue. Geoff Santini runs New Jersey Animal Control and Rescue and also created a nonprofit, New Jersey Humane Society, that houses the animals this animal control company picks up. At the time, local animal advocates felt “blindsided” and had many concerns about Mr. Santini’s past history in Hudson County. Specifically, the Garfield animal advocates cited how many times Mr. Santini changed the names of his companies, his relationship with his brother-in-law, Vincent Ascolese, who is a disgraced animal control officer, and the capacity of Mr. Santini’s animal shelter.

In December, the Garfield City Council decided to suspend its contract with Geoff Santini’s company. During this City Council meeting, the former Garfield mayor, and Garfield Animal Rescue Foundation President, Tana Raymond, argued Santini couldn’t properly service Garfield since Mr. Santini serves as an ACO in several Hudson County towns and his private animal control company also handles other municipalities in that county. Furthermore, Ms. Raymond stated she might sue Garfield if the city did not terminate its contract with Mr. Santini. Geoff Santini stated his shelter could initially hold over 20 dogs and 40 cats and house an additional 50 dogs and 60 cats after he finished expanding the facility around the end of 2017. Mr. Santini also claimed it is a no kill facility.

In January 2018, Garfield decided to keep on contracting with Mr. Santini saying the contract “is a valid binding agreement and can’t be rescinded.”

The “HCSPCA has repeatedly conducted it’s business in an unlawful manner,” Hudson County Superior Court Judge Thomas Olivieri said in today’s order dissolving the organization which was based on Johnston Avenue in Jersey City.

The judge also stated as reasons for the dissolution that “The HCSPCA has suspended its ordinary activities for lack of funds,” “is conducting its activities at a great loss and with great prejudice to the interests of it’s creditors” and “in a manner that is prejudicial to the public.”

The Office of the Attorney General argued Mr. Santini was involved in the activities that were grounds for dissolving the Hudson County SPCA.

Most importantly, the Office of the Attorney General cited several Hudson County SPCA violations of animal shelter laws while Mr. Santini was a board member of the organization.

On December 27, 2006, Mr. Santini became a member of HCSPCA’s Board and the Chief of the Law Enforcement Division. On the same day, the board also passed a motion to allow Mr. Galioto to lead the Law Enforcement Division. (ERR, Exh. C, HCSPCA-GARB-00012.) Despite these references to HCSPCA’s Law Enforcement Division, HCSPCA continued to rely on NJSPCA to provide law enforcement services in Hudson County. (ERR, Exh. A, 120-133.) The ERR shows that during the period from December 27, 2006, when Mr. Santini became a member of HCSPCA’s Board, and April 11, 2008, when Hudson County Animal Advocates commenced this action, HCSPCA engaged in many of the activities that are grounds for dissolution. These activities include : (a) HCSPCA misrepresented that Jason Bibber was an animal control officer in its contract with Union City (ERR at 7); (b) HCSPCA failed to comply with the record keeping requirements set forth in N.J.A.C. 8:23A-1.13 (ERR at 11-12); (c) HCSPCA failed to comply with the regulations governing sanitary conditions at an animal shelter (ERR at 15-17) (d) HCSPCA failed to have a health care program under the supervision of a veterinarian in violation of N.J.A.C. 8:23A-1.9 (ERR at 21-23) ; (e) HCSPCA failed to provide medical care to shelter animals in violation of N.J.A.C. 8:23A-1.9(d) (ERR at 25-26) (f) HCSPCA failed to establish and maintain a disease control program in violation of N.J.A.C. 8:23A-1.9 (a) – (c) (ERR at 27-29) ; (g) HCSPCA failed to maintain the animal shelter in compliance with regulations (ERR at 31) (h) HCSPCA failed to file federal tax returns ( ERR at 3 5) and ( I ) HCSPCA was insolvent ( ERR at 4 6 – 4 8 )

Furthermore, the Office of the Attorney General argued Geoff Santini failed to act properly after he became the the President of the Hudson County SPCA and Chairman of its board in 2008.

On June 25, 2008, Mr. Santini became the President of HCSPCA and the Chairman of the Board. Since Mr. Santini became the Chairman of the Board, HCSPCA has failed to take any actions to cure its insolvency, to repay its debts or comply with the filing requirements that apply to not-for-profit corporations. HCSPCA’s delay in filing its answer to the Attorney General’ s complaint, its failure to cooperate with the Equitable Receiver’s investigation and its attempt to sell HCSPCA’s property in violation of the Order, provide further evidence that Mr. Santini, and the Alleged Board, have no interest in turning HCSPCA into a good corporate citizen.

In late 2015, Bayonne animal advocates protested the replacing of Liberty Humane Society with Mr. Santini’s company. Prior to a Bayonne City Council meeting, the advocates staged a protest making many of the same allegations Garfield advocates have made. At the time, Bayonne elected officials decided to replace Liberty Humane Society with claims Liberty Humane Society did not respond appropriately to “nuisance wildlife.” In reality, Bayonne wanted to trap wildlife which almost always means killing such animals since relocation is typically not possible. While Mr. Santini’s spokesman, who also does this job for several Hudson County towns, said Mr. Santini planned to bring such animals to wildlife rehabilitation facilities whose objective is to release such animals into the wild, it defies logic that such facilities could do so without killing at least some of these creatures. The Department of Environmental Protection prohibits releasing adult animals from “rabies vector” species, such as raccoons and skunks, in areas outside the town they came from.

The story also documented Mr. Santini having additional Hudson County jobs. Specifically, he is also a constable in Hudson County and an administrative aide to County Freeholder Anthony Vanieri. Apparently, Geoff Santini’s multiple government job/contractor gig is shared with his friend, Mayor Sacco. Mayor Sacco is also a state Senator and also was the Director of Elementary and Secondary Eduction, a $260,000 a year job, until last year. Does anyone believe either of these individuals could adequately perform all these jobs simultaneously? Clearly, Geoff Santini and Nicholas Sacco are taking advantage of taxpayers to enrich themselves.

Garfield Can Terminate its Contract with Geoff Santini

Based on the agreement Garfield sent me, the city can terminate the contract as long as it documents the reason for doing so:

Furthermore, Garfield did not sign the copy of the agreement the city provided to me. When I asked the City Clerk, she stated Garfield does not have an executed agreement.

Thus, the City of Garfield’s claim that it was stuck with the contract does not appear to hold water.

Garfield paid All Humane Animal Control either $16,667 (annual amount listed) or $25,000 (sum of monthly amounts listed) per year according to the contract provided to me by the city. The contract did require the owners of stray animals to pay or the city (if the owners couldn’t do so) to pay for emergency veterinary care in addition to this amount.

Clearly, Garfield’s new animal control and sheltering contract costs far more than the previous arrangement. Thus, it is unclear what benefits the city is obtaining for this extra cost.

No Kill Shelter Claims Are Hard to Believe

The size of Geoff Santini’s shelter is important in determining if his organization can handle the many municipalities it serves. According to this article, a nonprofit entity called New Jersey Humane Society was created to run the shelter. If we take Mr. Santini’s word that the facility initially could hold 20 dogs and 40 cats, the capacity would be very tight. Specifically, if New Jersey Humane Society had the same per capita dog and cat intake as nearby Liberty Humane Society, New Jersey Humane Society would only have 16 days to move each dog and cat out of the facility before it runs out of room. However, the shelter would have a much more reasonable 56 days and 40 days to get each dog and cat out using these same per capita animal intake figures and assuming the claimed capacity from the expansion project exists. On the other hand, an article from 2016 stated the shelter would only house 45 dogs and 40 cats after its “Phase 2” project. Using these capacity figures and the aforementioned assumptions, the shelter would have 36 days and 16 days to move each dog and cat out before it runs out of space.

Geoff Santini’s animal shelter, New Jersey Humane Society, does not look very large from photos of the property. That being said, looks can be deceiving. On the other hand, Mr. Santini’s brother-in law’s shelter, Bergen Protect and Rescue Foundation in Cliffside Park, claims it can hold 78 dogs and 210 cats. However, when I visited the Cliffside Park facility, the building was so small that I found it implausible it could hold anywhere near that many animals. I’d suggest Mr. Santini have an independent party provide specific details on the number of dog and cat enclosures and the size of each one. Doing so, could make the public more comfortable with his operation.

That being said, the New Jersey Humane Society Facebook page does show the shelter doing some good things. The shelter lists a number of lost animals and mentions some pets that went to foster homes and rescue organizations. In the past, St. Hubert’s has rescued many dogs from hoarding situations Mr. Santini’s organization handled. However, New Jersey Humane Society’s Facebook page showed few adoptions it did itself.

Frankly, I find it difficult to believe Mr. Santini’s organization is attaining a live release rate of 90% or higher and impounding all animals needing assistance without seeing more details on its live release programs. Furthermore, despite claiming his shelter would open in 2016, Mr. Santini’s shelter did not submit statistics to the New Jersey Department of Health for that year. As we’ve seen in urban shelters, such as in Elizabeth and Paterson, facilities typically cannot achieve no kill status by relying almost entirely on rescues. Thus, Geoff Santini must provide more transparency into his organizations’ operations.

At the end of the day, I would truly like to believe Mr. Santini runs a real no kill animal control shelter that comprehensively implements the 11 No Kill Equation programs. Certainly, northern Hudson County needs a no kill animal control facility. However, Mr. Santini’s history concerns me and many other animal advocates. As such, he must prove to us that his way of doing things has improved dramatically. Simply put, don’t just call yourself “no kill”, prove to us that you are.

Until Mr. Santini can clearly demonstrate he is running a real no kill animal control facility that helps all animals in need, I cannot support Garfield’s or Bayonne’s decisions to contract with his company. Furthermore, I cannot understand why Garfield would pay significantly more money to Mr. Santini’s company than the city’s prior contractor. As such, Garfield and Bayonne should terminate their agreements with Geoff Santini’s company and contract with their previous providers (Garfield: All Humane Animal Control; Jersey City: Liberty Humane Society).