Was Bergen County Animal Shelter still a high kill facility in 2017? What kinds of animals lose their lives at this shelter? Does the shelter comply with state law?

The following table illustrates how few dogs the shelter sent to rescues. As you can see, almost all the rescues pulled less than ten dogs for the entire year. Furthermore, the rescues pulling the most dogs did not save any pit bulls. Even worse, every single one of the pit bulls rescued on this list went to other shelters. This suggests Bergen County Animal Shelter made little effort to reach out to rescues to save these types of dogs. 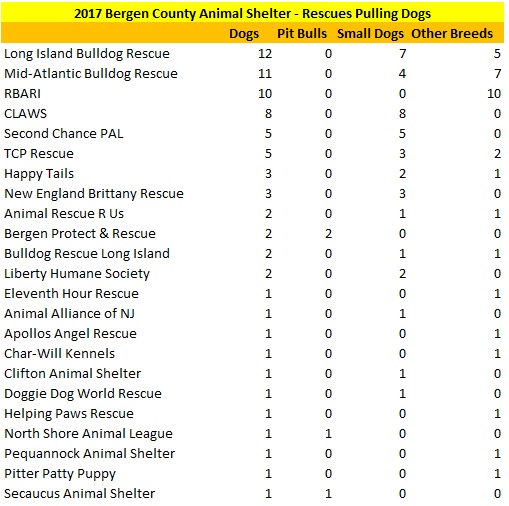 Dogs Stay Too Long at Shelter

Bergen County Animal Shelter’s inability to safely place dogs quickly increases the chance animals develop behavioral problems, medical issues, and ultimately raises the cost to operate the facility. In fact, shelter medicine experts consider length of stay a “critical factor” for shelters and decreasing it is essential for reducing disease, behavioral problems, and costs. Ultimately, if a shelter wants to achieve a high live release rate it must quickly place its animals safely.

Too Many Cats Lose Their Lives

Bergen County Animal Shelter’s cat statistics in 2017 were also not good. Overall, 16% of cats lost their lives or went missing. If we just count cats the shelter had to find new homes for (i.e. excluding owner reclaims and cats “released” through TNR and other programs), 20% of these cats lost their lives or went missing. Thus, cats were not safe at Bergen County Animal Shelter.

While I tabulated the cat statistics by age, I could not include them due to inaccuracies I noted. Specifically, the shelter had a very large number of cats with an age of zero days in their intake and disposition records report. However, when I obtained underlying records for a sample of these cats, I found a lot of these animals were different ages. Therefore, I could not conduct this analysis by age as I typically do.

Cats typically do not take life in traditional shelter environments well. While shelters can modify housing and create enrichment programs to make cats happier, reducing length of stay in a good way is critical. Ultimately, shelters are unnatural and scary environments for cats and facilities must quickly place these animals to achieve high live release rates.

Ammo was two year old Australian Cattle Dog originally surrendered to Bergen County Animal Shelter on April 18, 2017 and adopted out on May 17, 2017. Ammo’s original evaluation noted he was a friendly dog, but had minor food guarding issues. On August 3, 2017, Ammo’s adopter returned him to the shelter for allegedly biting a family member. On that day, the owner filled out an owner requested euthanasia form and the shelter killed Ammo on that very same day. Unfortunately, the shelter provided no documentation of the severity of the bite or the circumstances. For example, was the dog provoked or did it involve an avoidable situation (e.g. being close to the dog while it had a bone)?

Pursuant to State law (N.J.S.A. 4:19-15.16 a. through l.) all municipalities must have a licensed animal impoundment facility (pound) designated where stray and potentially vicious animals can be safely impounded. Impounded stray animals shall be held at the pound for at least seven days (i.e., 168 hours) from the time impounded before the animal is offered for adoption or euthanized, relocated or sterilized, regardless of the animal’s temperament or medical condition.

Animals that are voluntarily surrendered by their owners to licensed pounds or shelters shall be offered for adoption for at least seven days prior to euthanasia or shelter/pound management may transfer the animal to an animal rescue organization facility or a foster home prior to offering it for adoption if such a transfer is determined to be in the best interest of the animal.

Regardless of the severity of the bite, Bergen County Animal Shelter illegally killed an owner surrendered animal before seven days. Simply put, a shelter cannot kill an animal for aggression before seven days unless it is declared vicious by a New Jersey court and such court orders the killing of the dog. 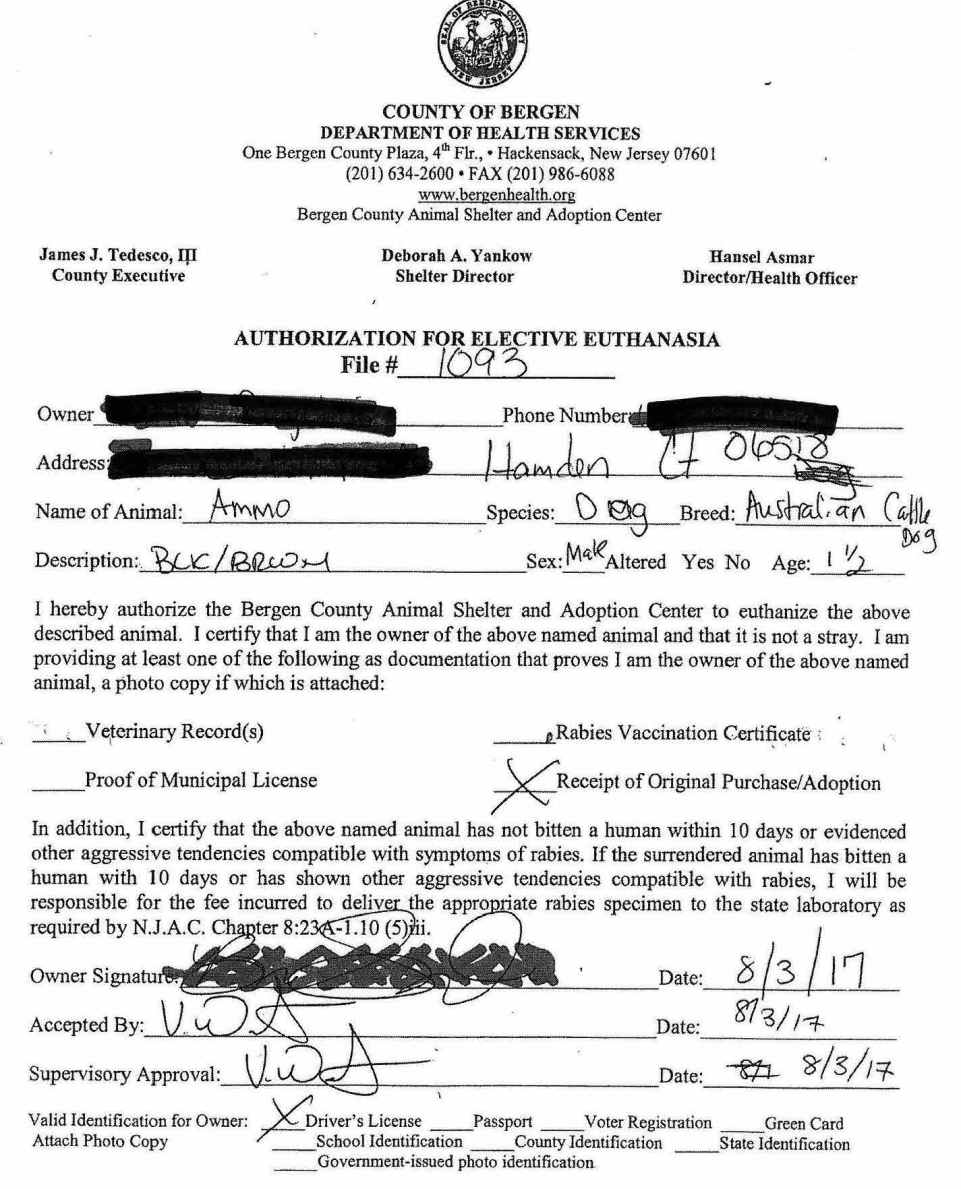 Cat ID# 400 was a stray young cat brought to Bergen County Animal Shelter on January 12, 2017. Four days later the shelter gave the cat a medical exam, During the exam, the cat weighed 6.22 pounds, which is a weight that is not unusually low for a stray and young cat (i.e. the cat was not completely emaciated), and gave him an FIV/FELV test. After the cat tested positive for FELV and the shelter labeled him “Feral”, the shelter killed him on the very same day. The shelter provided no documentation that this animal was hopelessly suffering. 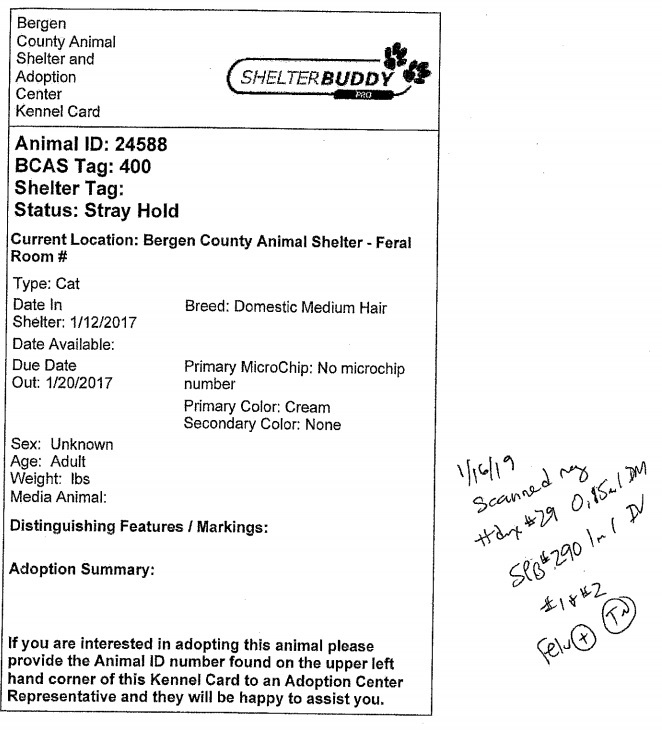 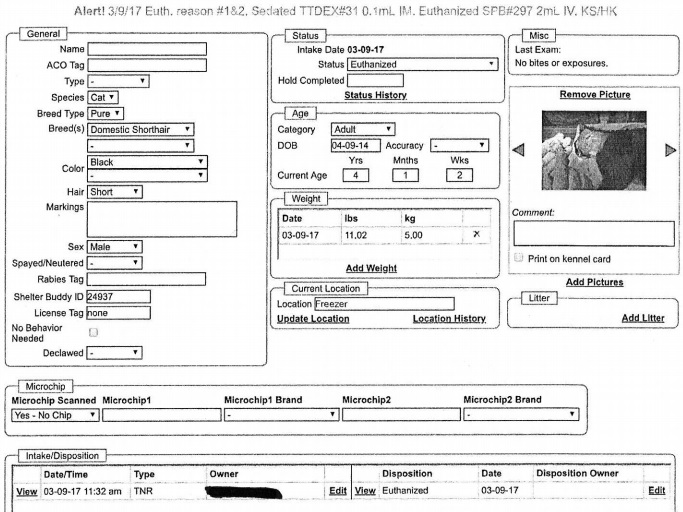 Beast or Dog ID# 3343 was a seven month old pit bull surrendered to Bergen County Animal Shelter on November 7, 2017. Two days later the shelter noted the owner requested they be notified if Beast failed his behavior evaluation. The owner contacted the shelter three days later stating she found someone interested in giving Beast a home. However, Bergen County Animal Shelter performed one of its infamous “evaluations” 15 days later on November 27, 2017 and stated Beast had an “unhealthy obsessive personality and high arousal, coupled with his resource guarding will eventually leave any handler injured”

How did the geniuses at Bergen County Animal Shelter determine a seven month old puppy would maul “any handler?” Despite having no bite history and taking “corrections well”, he was “very rough, rambunctious and ill-mannered.” In other words, Beast was a big puppy. The crackpot staff at Bergen County Animal Shelter also claimed he guarded a rawhide. Given that multiple studies have found shelter dog evaluations, including food/resource aggression tests, unreliable and even the creator of one of the major food/resource aggression tests has come out against using these evaluations, its amazing Bergen County Animal Shelter would use this to condemn this puppy to death. As the shelter continued to antagonize Beast during during a stranger-test, he “lunged” (but did not attack) at one of the shelter workers. In other words, the dog communicated to the staff he didn’t like what they were doing and did so without harming them. However, Beast acted “more loose” with another employee and “was willing to investigate.”

Given we know behavior evaluations in shelters are completely inaccurate, the shelter’s decision to kill this dog for acting like a big puppy, guarding a rawhide and showing non-violent protective behavior during a stressful evaluation is absurd. Even worse, the shelter refused to even attempt to modify these so-called behavior problems. In other words, Bergen County Animal Shelter killed Beast for no good reasons. 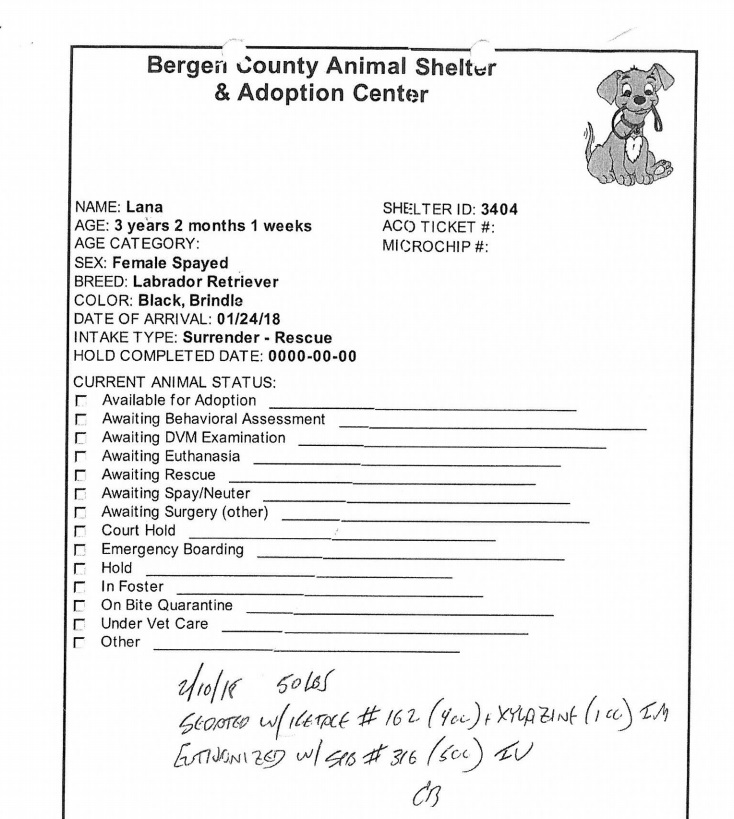 Onyx or Dog ID# 889 was an 11 month old dog surrendered to the Bergen County Animal Shelter on March 23, 2017 due to the owner having housing issues and not having the money to afford a boarding facility. According to Onyx’s owner, Onyx lived with the family since he was three months old. The owner stated they spent time everyday training Onxy, playing with him and walking him. In addition, Onyx’s owner stated the dog had no moderate or severe behavior issues. Additionally, the owner stated Onyx was crate trained, friendly with strangers, good with kids and dogs, trained and walked well on a leash.

Despite the owner clearly indicating Onyx was a wonderful dog, Bergen County Animal Shelter’s staff viewed Onyx as a terrible dog. According to Onyx’s evaluation on March 28, 2017, he “PULLED EXTREMELY HARD” when taken out of the kennel, exhibited various jumpy/mouthy behaviors, and was “obsessed” with his toy. In other words, Onyx was a big puppy, which the shelter even admitted in its evaluation. Despite Onyx being an overgrown puppy, Bergen County Animal Shelter decided to kill him on May 17, 2017 due to these so-called problems not improving. Miraculously, the shelter claimed Onyx was not a “safe adoption candidate” due to his strength and energy even though he was great with his prior family. To make matters worse, the shelter claimed they had no rescues to place their pit bulls even though the facility does not seem to make public pleas to such organizations. Bergen County Animal Shelter killed Onyx the day after the shelter’s evaluator condemned him to death. 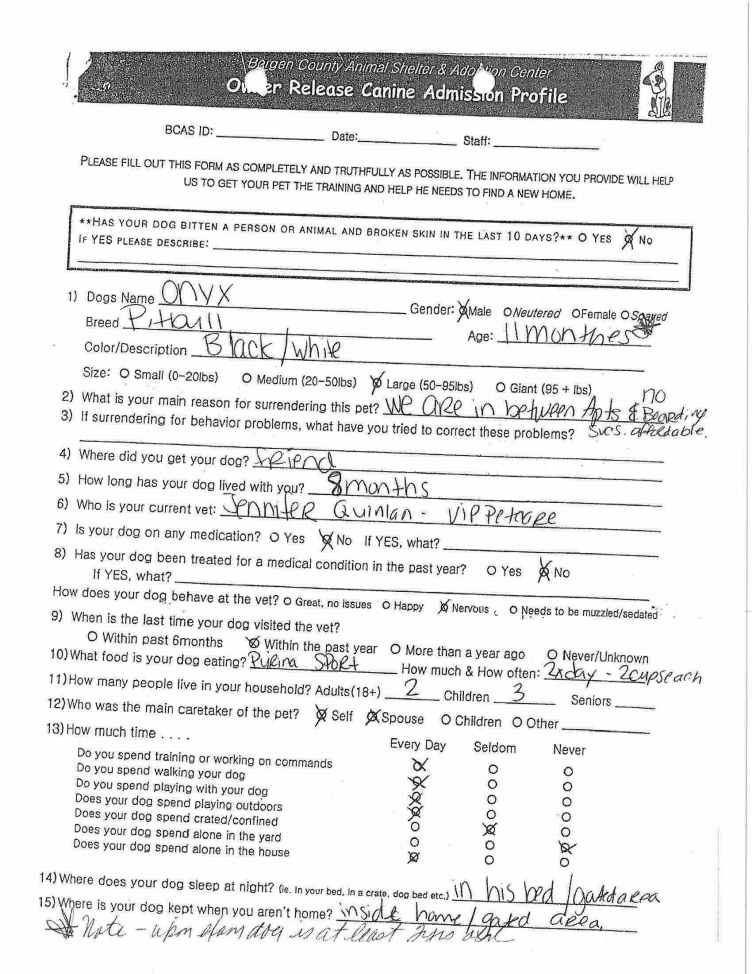 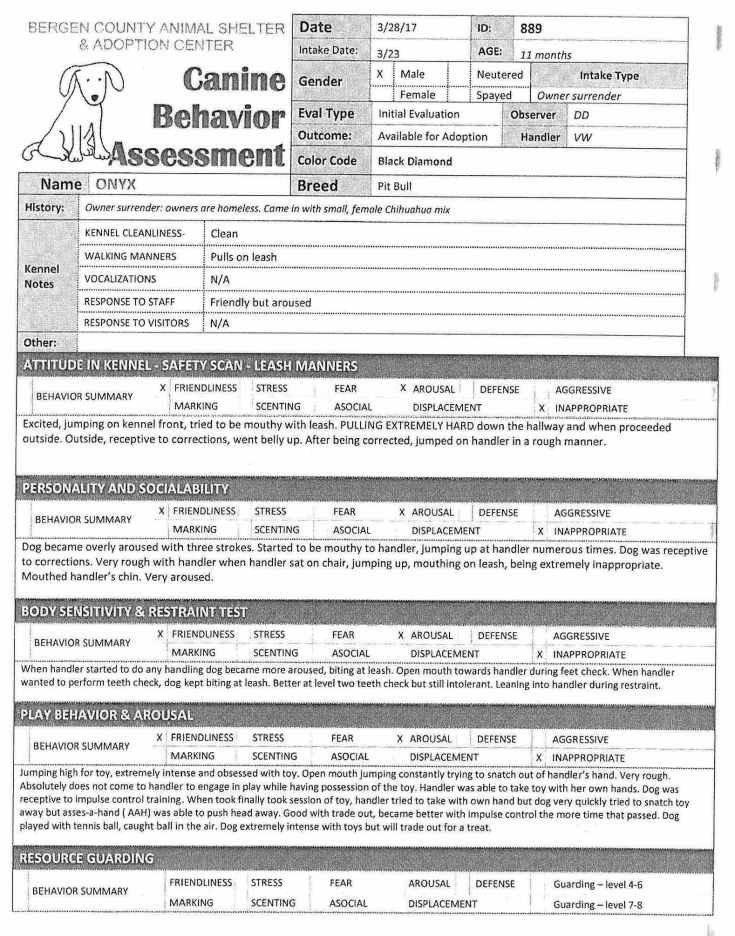 Heaven was a two year old female cat surrendered to Bergen County Animal Shelter on January 25, 2017 due to her owner having cancer. According to the owner, Heaven was litter box trained, liked to be petted, enjoyed scratching posts and was an indoor cat. Given the owner was going through a crisis in their life and this cat seemed like a nice pet, you would think Bergen County Animal Shelter would make every effort to save this animal.

Bergen County Animal Shelter used its absurd cat temperament tests to kill Heaven. Like dog behavioral evaluations, these tests, which deliberately stress out cats to provoke a bad response, are discredited due to their inaccuracy. Heaven passed a behavioral evaluation given to her four days after she arrived at the shelter. She received a score of 9 points on a scale where under 10 points results in placement anywhere on the adoption floor. Apparently, Bergen County Animal Shelter wasn’t happy with saving a cancer patient’s cat since the shelter tested Heaven again on February 24, 2017. Despite this test finding Heaven approaching the evaluator in a friendly manner and not bothered by petting, the tester complained Heaven hissed, swatted and bit when she was picked up. As many cat owners know, some cats just don’t like being picked up, particularly when they are stressed. Heaven scored 16 points on this test and was placed in a middle grade of the test’s scoring scale, 11-16 points, which resulted in the shelter placing her in Cat Room 2. Bergen County Animal Shelter then tested Heaven again on March 9, 2017, putting her though the abusive provoking exercises once more, and failed her this time. Why? Apparently, after being harassed in several tests, Heaven was afraid/hiding when the people torturing this poor cat sat next to her. Bergen County Animal Shelter killed Heaven four days later. 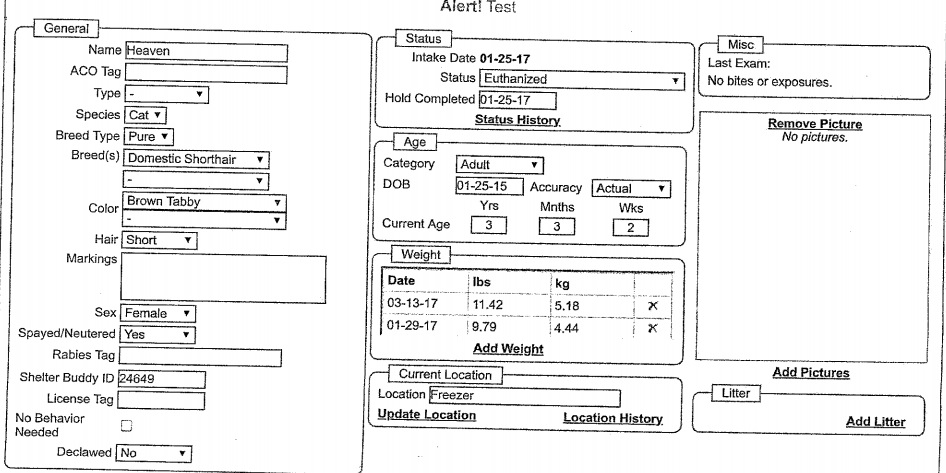 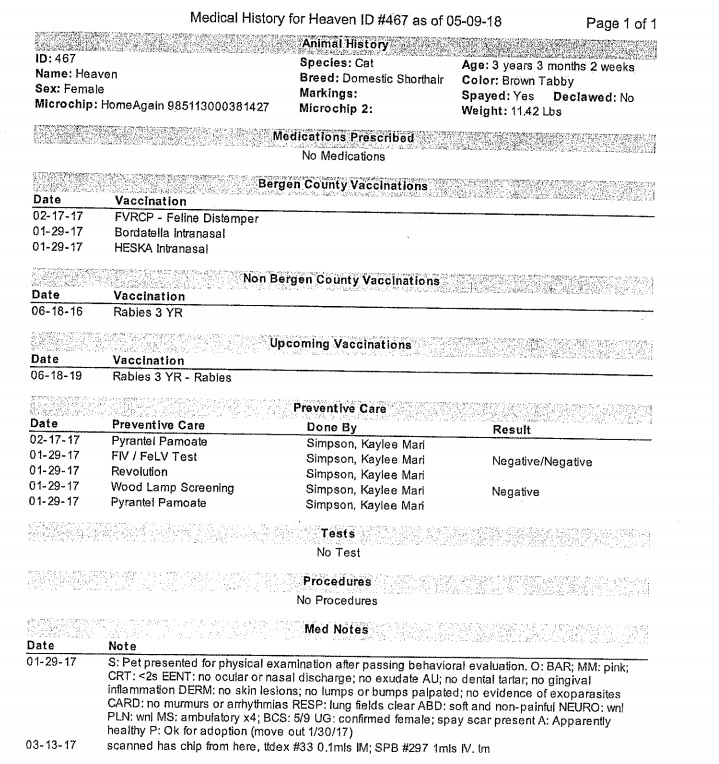 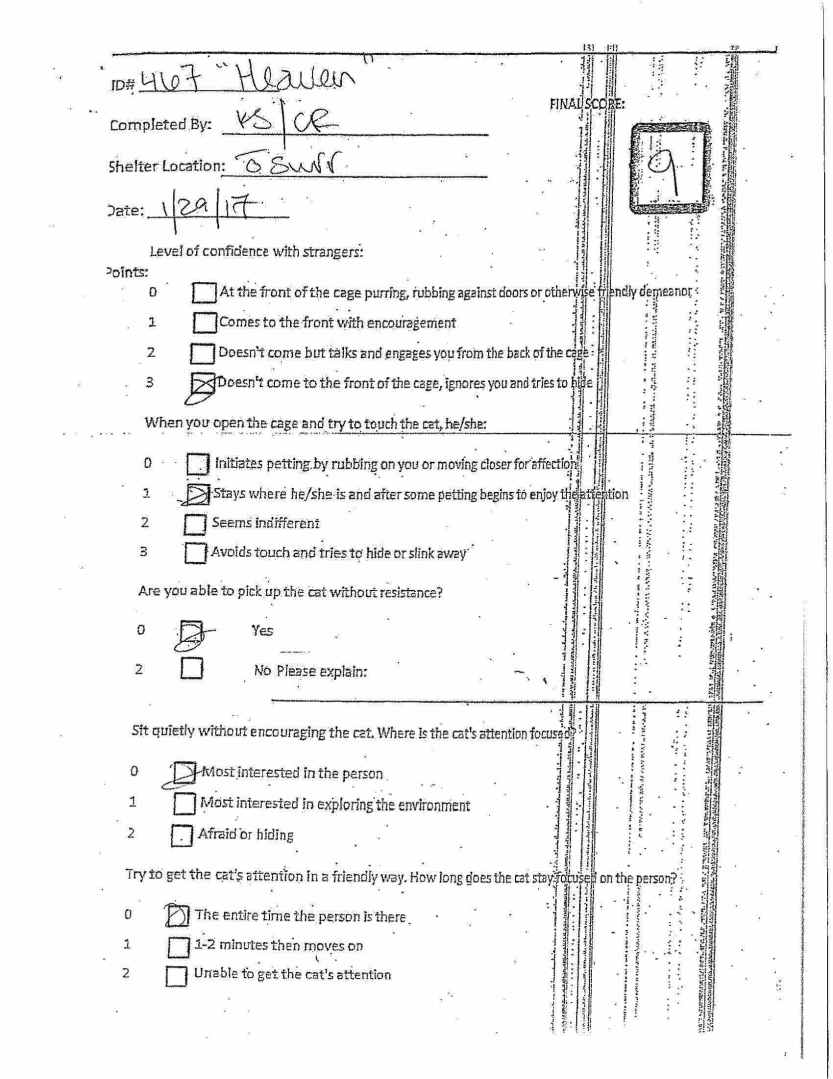 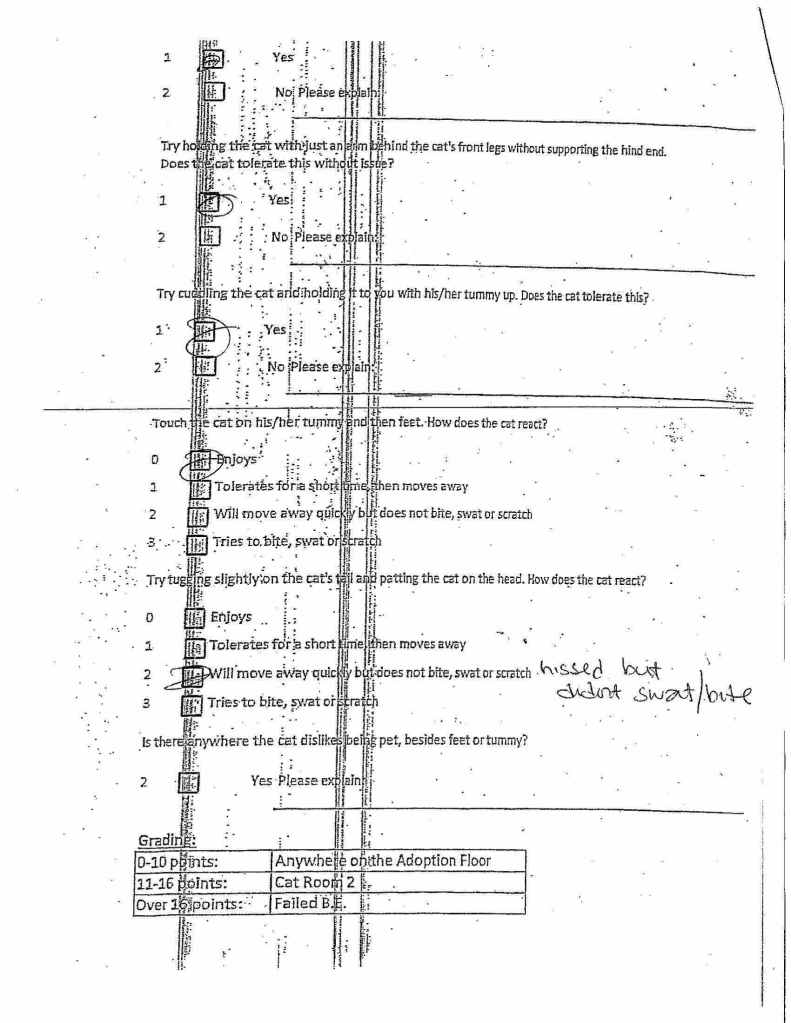 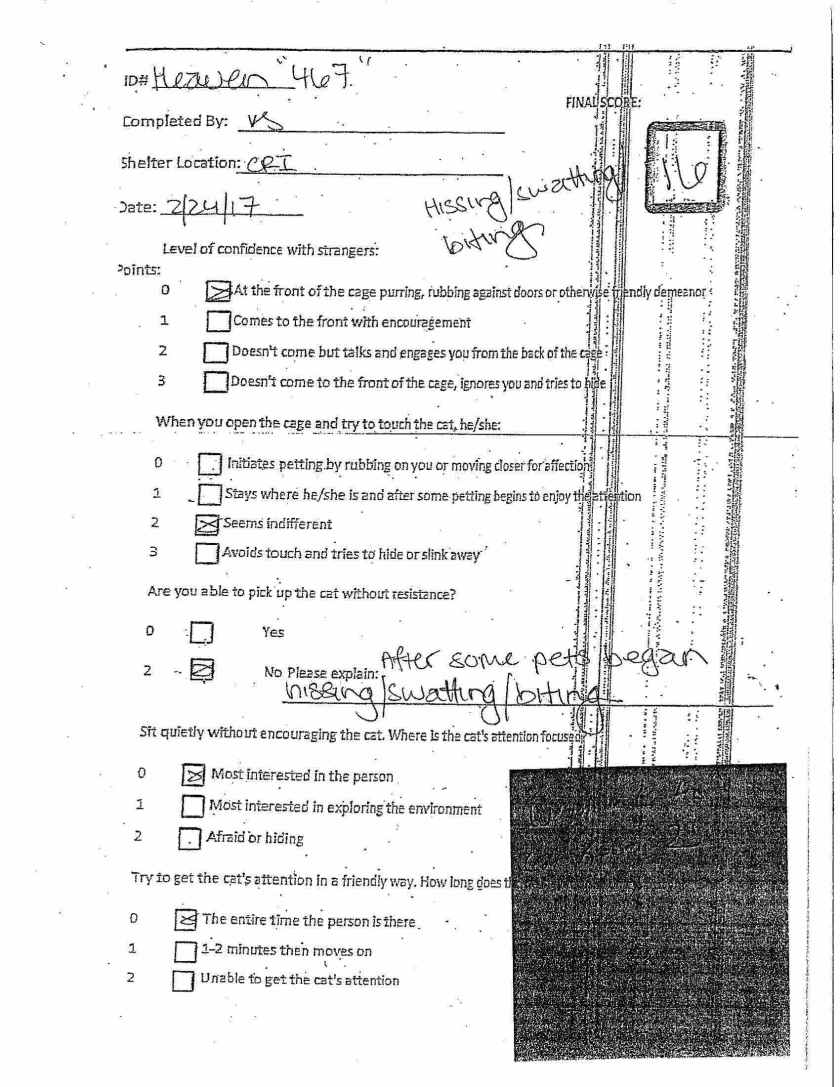 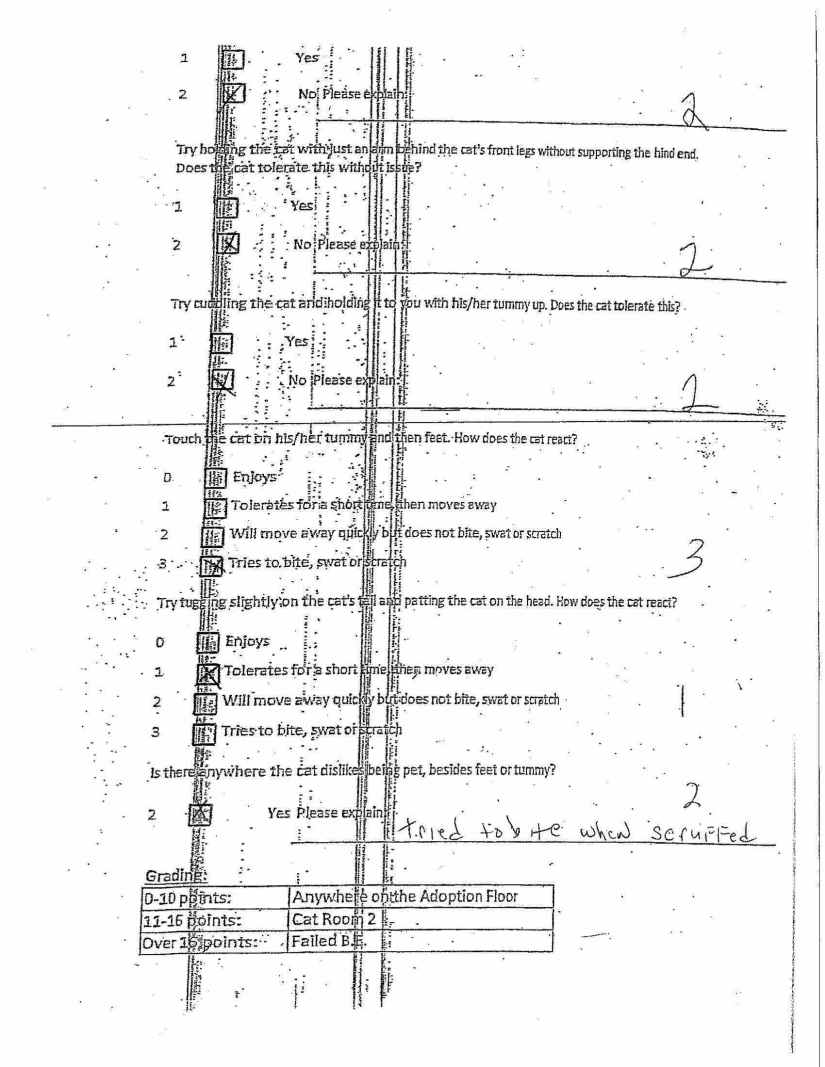 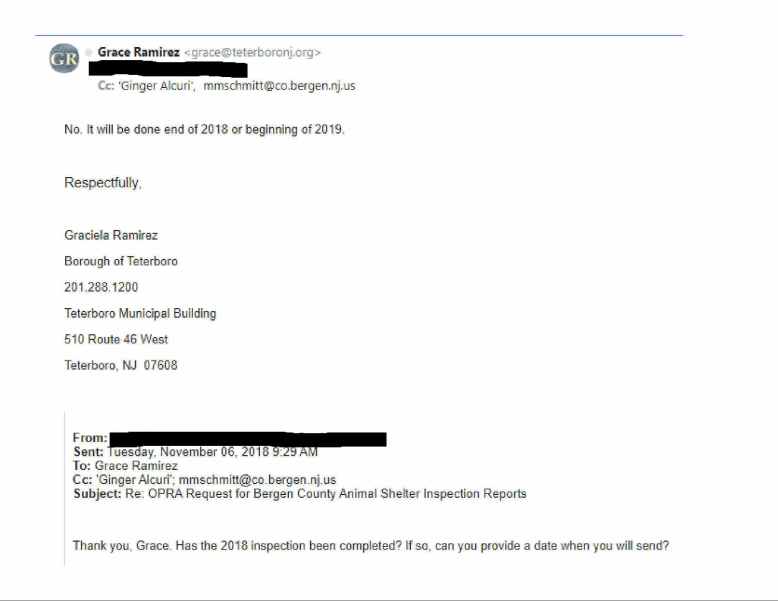 Clearly, Bergen County continues to operate a regressive animal shelter. As I discussed previously, Bergen County residents should be outraged that their tax dollars support a high kill shelter that conducts illegal activities and their elected leaders tried to deceive their constituents into believing it was “no kill.” If you live in Bergen County, please contact the following elected representatives and tell them you expect Bergen County to hire a top notch shelter director who will adopt the 11 step No Kill Equation and achieve live release rates well over 90% like Austin, Texas and hundreds of other communities have.