Associated Humane Societies – Newark’s Assistant Executive Director, who is the organization’s number 2 ranking person and representative in many media interviews, posted an insulting joke about Newark’s residents on his personal Facebook page recently. The photo is identical to the following image except “New Jersey” replaces “Ohio “and” “Newark” takes the place of “Michigan.” 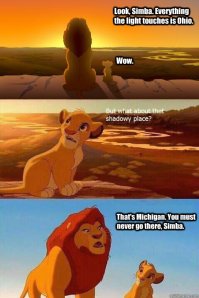 This behavior demonstrates a clear disrespect for Associated Humane Societies’ community. Telling your shelter’s hometown they live in a “shadowy place” and “you should never go there” is deeply insulting. If you lived in Newark, would you want to support this shelter? Perhaps, this attitude towards the city’s residents along with a past scathing investigation and poor performances in Office of Animal Welfare inspections in 2009 and 2011 led to the popular Cory Booker administration’s displeasure with Associated Humane Societies.

The remark sends the message to people outside of Newark to not visit the shelter since the facility is in a “shadowy place” that “you must never go” to. The “you must never go to Newark” message makes even less sense when you consider  Associated Humane Societies, to the best of my knowledge, does not adopt out dogs at its off-site events (i.e. you have to go back to the shelter in Newark to adopt the animal you meet outside of the shelter). As a result, the Assistant Executive Director of Associated Humane Societies’ Facebook post hurts the cause of his shelter’s animals.

The “irresponsible public” argument and resulting attitude communicated by Associated Humane Societies represents a huge obstacle to creating a no kill community. While the shelter’s personnel may have negative experiences with the public, those interactions are not representative of the entire population. Newark most likely is more responsible than the average American community. Associated Humane Societies – Newark took in approximately 8 dogs and cats per 1000 residents in its service area during 2012. Unfortunately, we do not know what the city of Newark’s per capita intake rate is since Associated Humane Societies impounds dogs and cats from numerous other communities. However, the nearby urban communities of Elizabeth, Paterson plus surrounding towns and Jersey City – Hoboken took in approximately 7 dogs and cats per 1000 people. Nationally, Maddie’s Fund states the average community impounds 14.5 dogs and cats per 1000 people. Thus, Newark likely impounds around half the number of animals as the average American community on a per capita basis. Therefore, “shadowy” Newark is likely more responsible than many less “shadowy” places.

Associated Humane Societies should also implement targeted spay/neuter and pet owner support programs to help struggling pet owners in areas with higher impound rates. For example, the ASPCA’s Operation Pit in New York City and Monmouth County SPCA’s Pittie Project programs offer free spay/neuter, vaccinations and microchips to pit bulls. Spay & Neuter Kansas City provides another great example of not only substantive programs, but a helpful and nonjudgmental attitude towards the people requiring help. This organization literally goes door to door in some of the poorest neighborhoods to help struggling pet owners. As a result of these programs and relationship with the community, Spay & Neuter Kansas City assisted over 15,000 people with spay/neuter surgeries, veterinary services, and pet outreach programs in 2013.

Let’s drop the “shadowy” jokes about people and get onto helping folks and their animals. That is how you save lives!