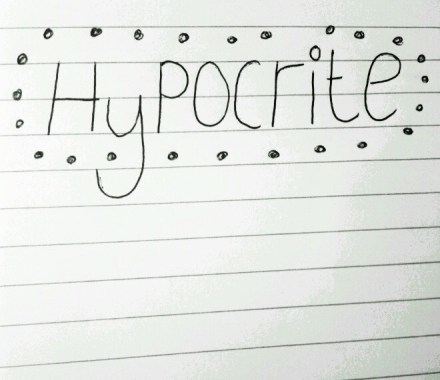 In 2013, the NJ SPCA confiscated a loose dog named Telly around a yard that was littered with trash in Newark. The NJ SPCA sent the dog to Associated Humane Societies-Newark as the animal was apparently a stray dog. However, the NJ SPCA decided to educate and work with the property owner to improve the care of a dog named Tez the family often kept outside. Justice Rescue reported the family faced serious hardships and really needed help. The rescue cleaned up the family’s property and provided a warm dog house and much needed supplies to see if the dog could avoid going to the high kill AHS-Newark shelter. If the remediation efforts did not work, the NJ SPCA could still seize the dog and rescues were willing to take the animal.

AHS demanded the NJ SPCA and the owner surrender the dog to AHS immediately. Through a series of posts over several months, AHS whipped the animal welfare community into a frenzy. While anyone reading this blog and my Facebook page know I am highly critical of the NJ SPCA, I thought AHS was acting hypocritically. For example, AHS claimed it did not operate a high kill shelter and mostly euthanized terminally ill animals or vicious dogs:

Contrary to what has been put on the internet, we are not a high-kill shelter; we do not euthanize senior dogs for space. We have a very low euthanasia rate — much of which is senior citizens from the community who cannot afford vet fees to euthanize their own pets or extremely vicious dogs that failed evaluation and were unsafe to adopt out to families. Just log on to our home page and you will see what we do for lots of animals that come through our doors.

To further pull at the animal welfare community’s heartstrings, AHS argued the NJ SPCA and the owner should surrender their dog to AHS due to the two separated dogs missing each other. In order to determine if these concerns were legitimate, I reviewed documents detailing how AHS cared for other bonded animals arriving at AHS-Newark from the City of Newark. Does AHS show as much compassion for these other animals who are not in the public eye?

On January 29, 2014, the Newark Police Department seized three dogs in a drug raid and sent the animals to AHS-Newark. After 14 days, AHS-Popcorn Park took one of the dogs, a highly adoptable 1 year old whippet named Summer (ID# 122684). In fact, the owner signed this desirable dog over to AHS, due to the owner lacking financial resources, on the day AHS-Popcorn Park transferred the whippet in. However, AHS-Newark kept the other dog in this household, a 5 year and 2 month old pit bull (ID# 122683) for 29 more days at AHS-Newark until AHS-Newark killed the dog for no documented reason. Similarly, AHS-Newark killed another owner’s dog seized in the raid, a 4 year and 2 month old pit bull (ID# 122686) on the same day as the other pit bull for no apparent reason. If AHS was legitimately concerned about the well being of the two bonded dogs, Tez and Telly, why would AHS separate this highly adoptable whippet from her brother and possibly another friend? Furthermore, why would AHS kill these two pit bulls who were potentially friends? 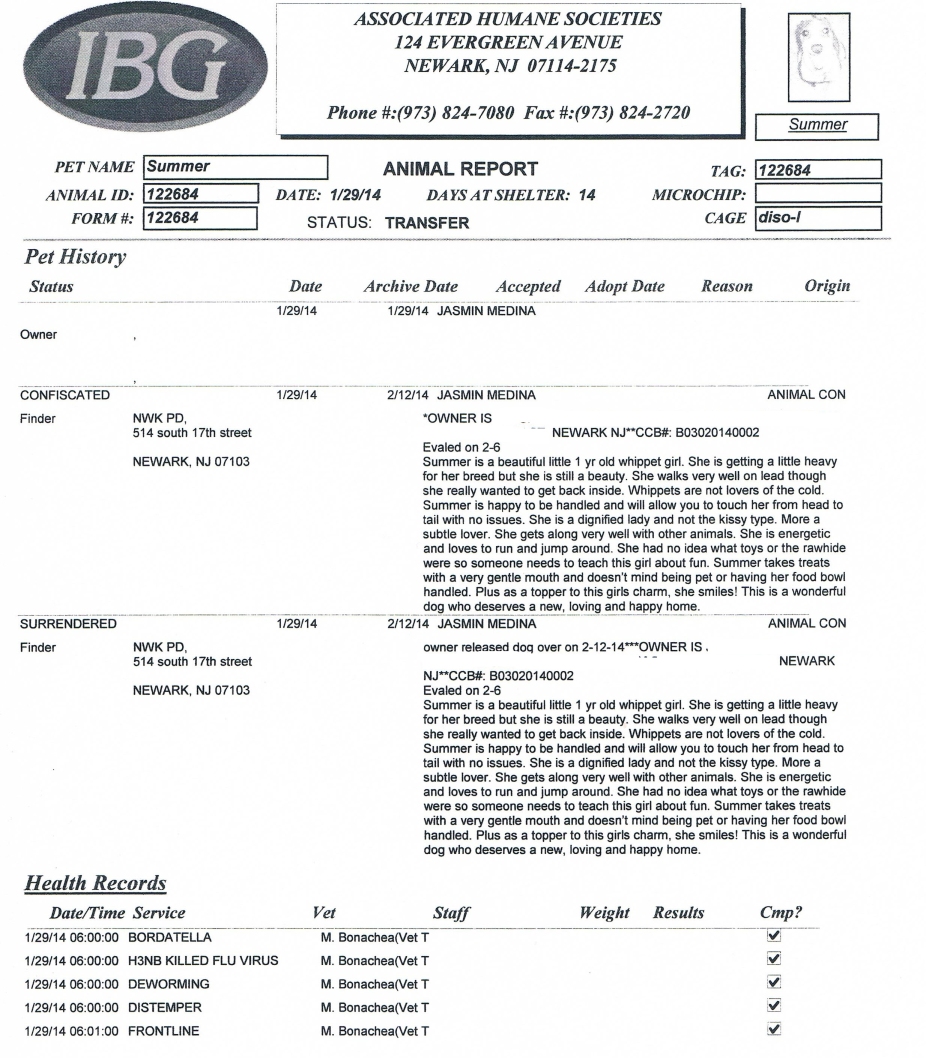 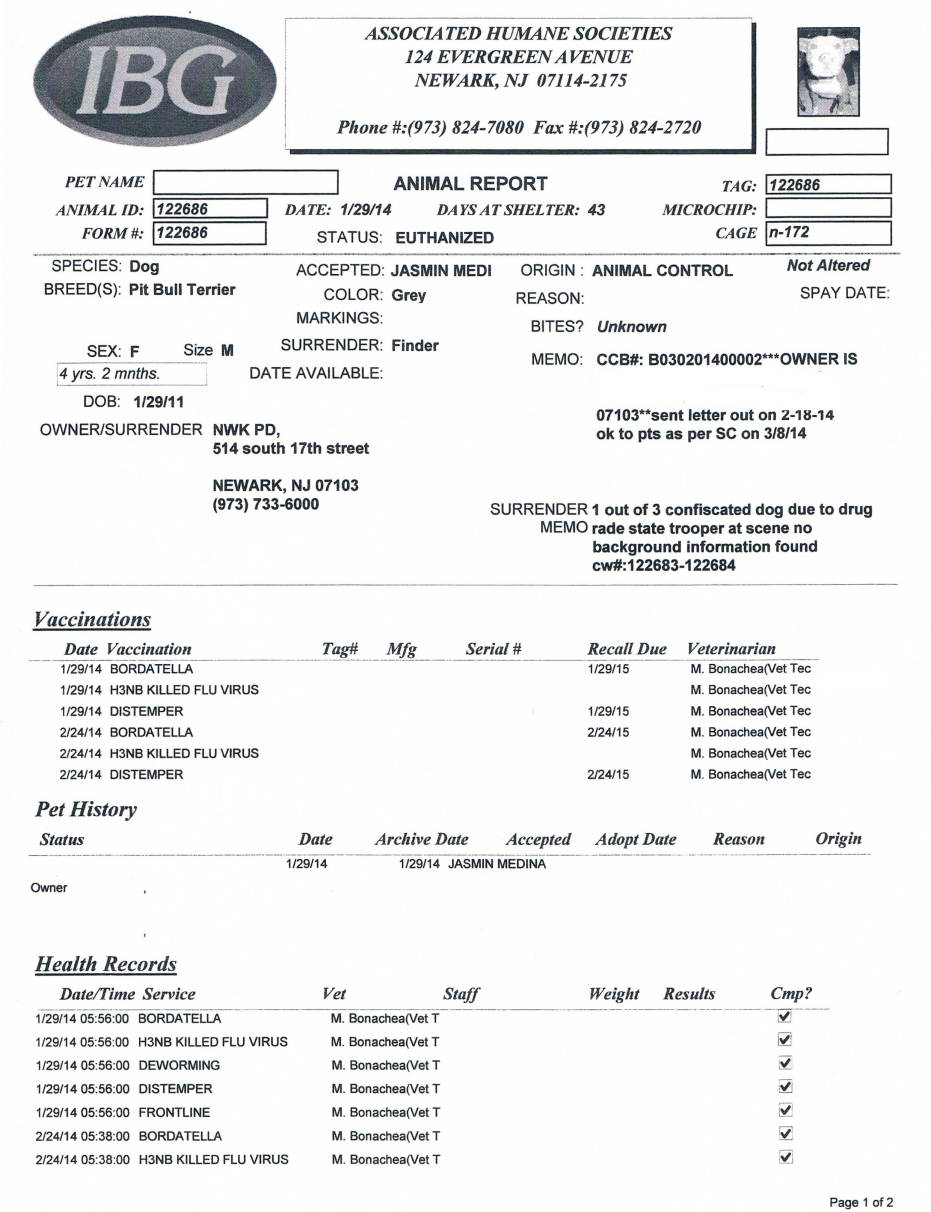 On February 19, 2014, the Newark Police Department confiscated three emaciated dogs in a backyard and brought the animals to AHS-Newark. If AHS were to ever go the extra mile to save animals, this was it. Unfortunately, AHS-Newark killed all three dogs for dubious reasons. After just 9 days, AHS-Newark killed a 3 year and 1 month old pit bull mix (ID# 122974) for no documented reason. Other than standard vaccinations, deworming and flea and tick medicine, AHS-Newark’s intake and disposition record documented no special veterinary care or treatment to heal this animal’s emotional wounds. AHS-Newark killed the second of the three emaciated dogs, a 2 year and 1 month old pit bull mix (ID# 122973), after 46 days for no documented reason. Other than various vaccinations, AHS-Newark documented no additional veterinary care or emotional support provided to this abused animal. The third dog, a 2 year and 1 month old pit bull-Dalmation mix (ID # 122972), received an evaluation stating the dog was very shy and submissive. Additionally, the evaluation said the dog needed someone with patience. Instead of rehabilitating this traumatized dog, AHS-Newark kept the dog at the very stressful and loud Newark shelter for 4 months or so and killed him for not getting along with other dogs and being “cagey.” If AHS decided to kill all three of these apparently bonded and abused dogs, how can the organization argue that the connection between Tez and Telly should not be broken? 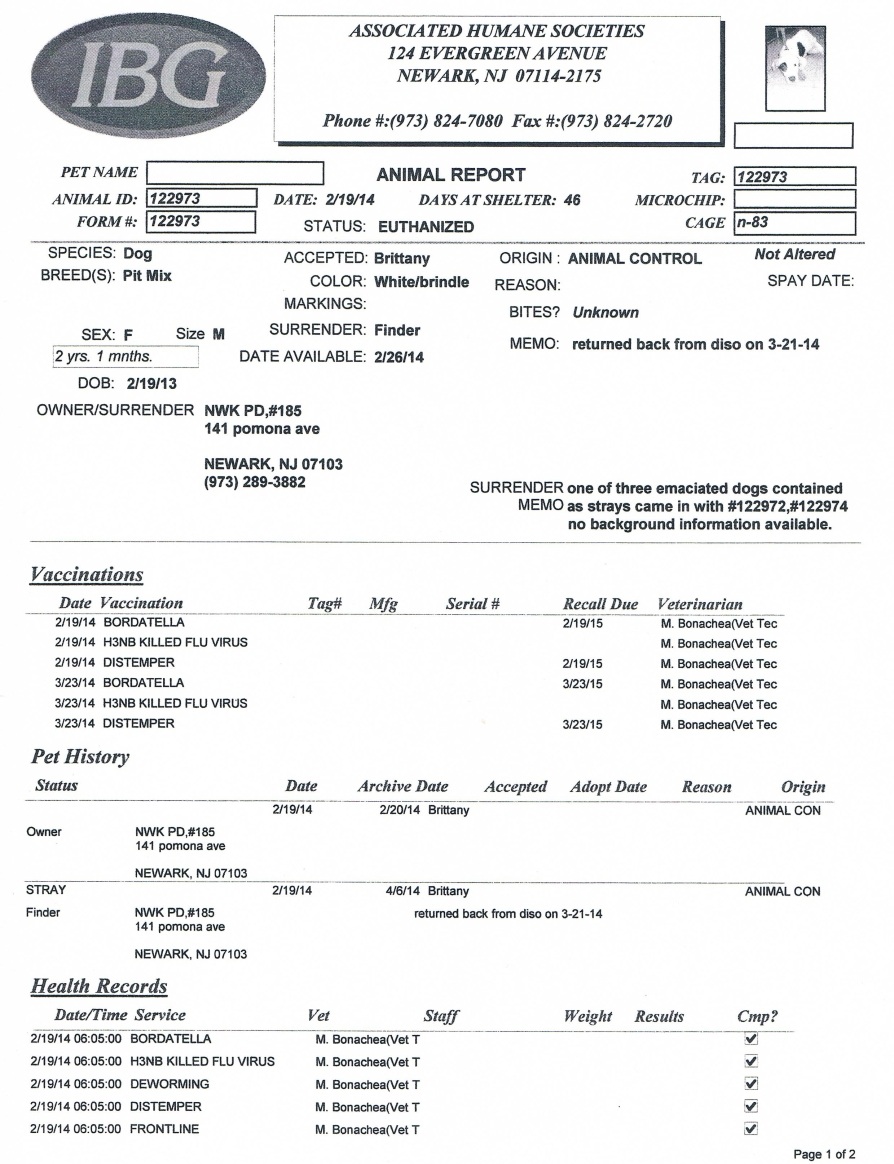 Mumu (ID# 124221), Blade (ID# 124222) and Finn (ID # 124223) were three brother cats surrendered to AHS-Newark on April 17, 2014. Despite all three cats being less than two years old and housetrained, AHS-Newark killed all three animals on the same day for no documented reason. According to AHS the connection between Tez and Telly was so powerful that the two animals could not live apart, but the bonds between these three brother cats were not strong enough to even warrant an explanation for their killing.

On June 9, 2014, Newark Animal Control picked up three stray dogs and sent the animals to AHS-Newark. Dog ID# 125725 was a 4 year and 10 month old pregnant pit bull like dog. The pregnant dog gave birth to one still born puppy. Despite this poor mother dog losing her puppy, AHS-Newark killed her just 11 days after her arrival for having a URI, being “hard to handle”, and not being compatible with dogs (even though she came in with two other dogs). The second of the three dogs, Dog ID# 125727 was a 1 year and 7 month old pit bull like dog. After just 12 days, and the day after AHS-Newark killed Dog ID# 125725, AHS-Newark destroyed this dog for having a URI, the isolation area being full, and not being good with other dogs (even though he came in with two other dogs). The third dog, Dog ID# 125726 was one of the rare dogs receiving a name and an evaluation. The evaluation stated this dog, named Danny, was “playful”, “good with other dogs”, and “high energy.” Furthermore, Danny was one of the select few dogs to participate in a photoshoot. Despite all this going for him, AHS-Newark killed Danny after around 3 months for not being compatible with dogs and acting “insane in kennels.” Apparently, AHS-Newark placed little value on the emotional connection between these three dogs and the mother dog’s sadness due to recently losing a puppy. 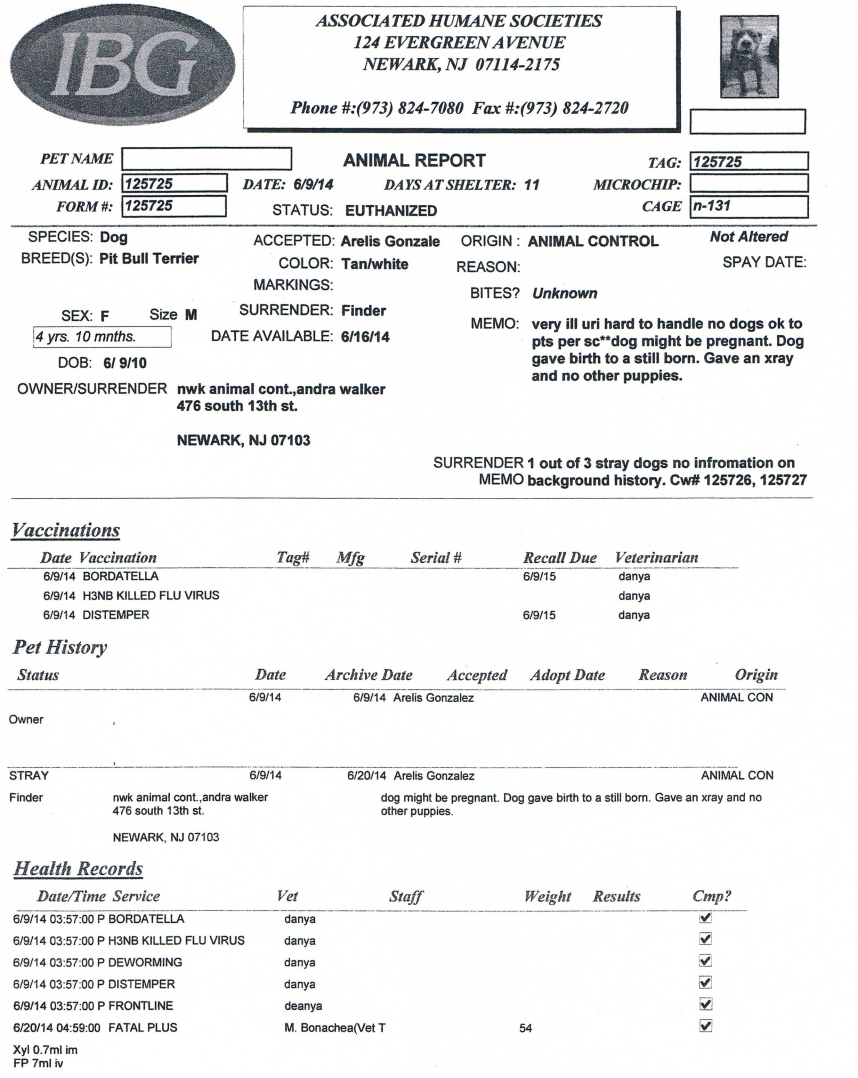 AHS-Newark impounded a lactating mother cat, ID #126021, and her kitten, ID# 126020, on June 19, 2014. Miraculously, AHS-Newark adopted out the kitten 8 days after her arrival at the shelter. However, the kitten’s mother remained at AHS-Newark. AHS-Newark killed the mother cat four days after the shelter adopted out her kitten. Once again AHS placed no value on the mother-kitten bond yet claimed the dogs, Tez and Telly, must be kept together at one of the organization’s shelters. 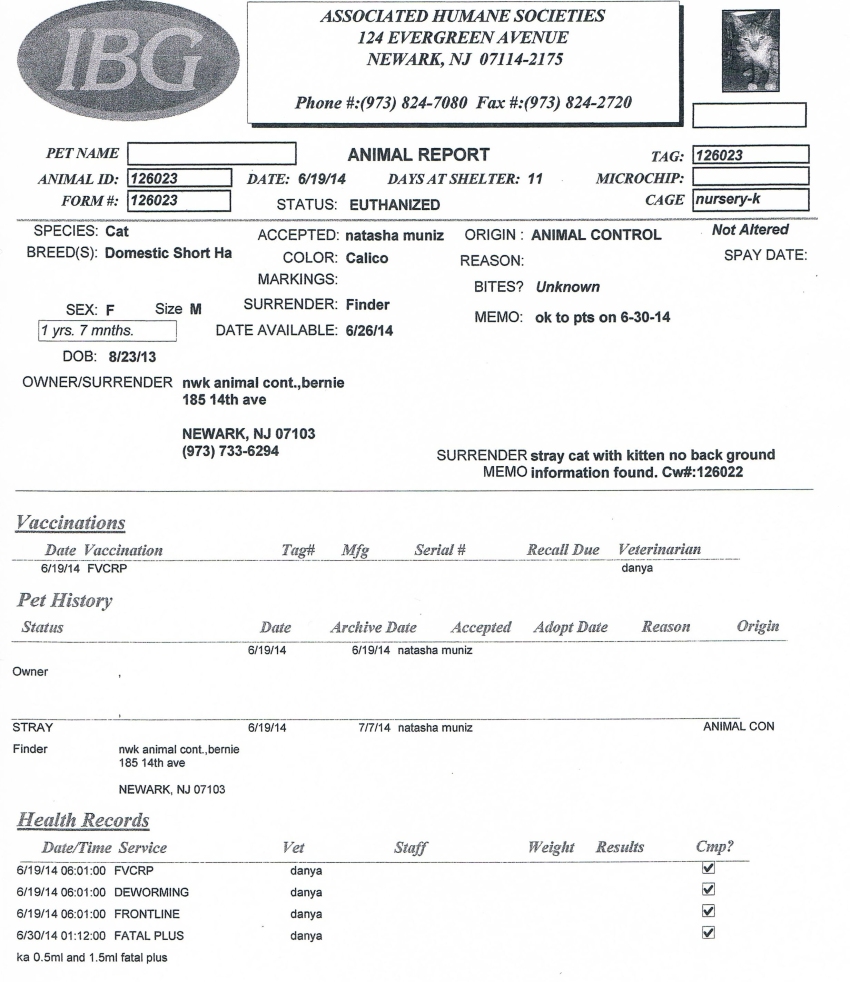 The examples above expose the hypocrisy of AHS. AHS emphasized the bond between animals when it came to winning a fight with the NJ SPCA and raising money, but obliterated those types of bonds when no one was looking. In fact, AHS regularly highlights alleged animal cruelty to raise money on its web site with tabloid like headlines such as “3 Abandoned Dogs Tied Outside with No Shelter”, “Calista – Emaciated, Sweet 10 Month Old Pup”, “Van Gogh – Mutilated, Abandoned, Found by Good Samaritan”. While AHS may save these animals, AHS does not tell donors about the many other dogs and cats AHS-Newark kills for dubious reasons. As a result, AHS fails to disclose the complete truth about its operations to donors and the animal welfare community.

At the end of the day, donors must wake up and demand AHS change its ways. Apparently, AHS thinks it can dupe its donors into thinking most of the animals it impounds from Newark are heroically rescued and sent to loving homes. Based on the records I reviewed, this absolutely is not the case. AHS must remove its entire senior leadership team, including Roseann Trezza and Scott Crawford, and replace them with people dedicated to comprehensively implementing the no kill equation. The good people donating to AHS clearly expect the organization to save its animals. It is time donors require AHS to use their hard earned money to save animals and not kill them for convenience and cost savings