Clifton Animal Shelter’s euthanasia records do not specify how the shelter killed or euthanized animals as required by state law. Specifically, the records do not state whether the shelter euthanized/killed each animal by an intravenous (preferred method), intraperitoneal or intracardiac (i.e. heart sticking) injection. Per New Jersey law, shelters can only use intraperitoneal injections on comatose animals and neonatal kittens. Under this method, animals are injected in the abdominal cavity and can take up to 30 minutes to die. Heart sticking, as the name implies, involves stabbing an animal in the heart with Fatal Plus poison and New Jersey shelters can only use this method on heavily sedated, anesthetized or comatose animals. Thus, Clifton Animal Shelter’s euthanasia records do not indicate whether animals are in fact humanely euthanized.

To make matters worse, Clifton Animal Shelter’s records indicated the facility did not even weigh animals prior to killing them. In other words, the shelter could have not provided enough sedatives to calm the animals and not enough euthanasia drugs to kill them. Therefore, animals could have experienced stress and pain during the procedure and then may have been dumped or put into an incinerator while still alive.

Clifton Animal Shelter also used excessive doses of Ketamine. The shelter administered 1.0 to 2.0 milliliters of Ketamine to virtually every adult cat it killed. The product label states 1 milliliter of the Ketamine drug contains 100 milligrams of the active Ketamine ingredient. In addition, the product label states cats requiring restraint should receive a dose of 5 milligrams/pound of cat. The product label also states veterinary personnel should use a dose of 10-15 milligrams/pound of cat to produce anesthesia. Based on most cats weighing 8 pounds, that means the cats should have only received 40-120 milligrams or 0.4-1.2 milliliters of the Ketamine drug. In other words, Clifton Animal Shelter provided doses of up to five times greater than the label indicates. Given large doses can “produce convulsions and seizures”, this indicates many animals could have experienced agony prior to their killing.

To make matters worse, Clifton Animal Shelter had no records showing how it used another sedative, Xylazine, despite the facility purchasing significant quantities of this drug. While the shelter is not required to keep controlled dangerous substance logs of Xylazine under existing law, the facility must detail how much of this substance it gave to animals it killed under N.J.A.C 8.23A-1-11(f)(4).  Thus, Clifton Animal Shelter either broke state law by not recording its use of Xylazine, violated the Open Public Records Act by not providing the records I requested or spent $456 on drugs it didn’t use.

The Clifton Health Department inspected Clifton Animal Shelter on July 25, 2017 and found serious issues. You can read the full inspection report here. The shelter’s dog kennel area had rodent droppings and the dogs likely had the rodents enter their enclosures. How did the rodents likely get into this area? The shelter had holes in the floors and open containers of dog food. Therefore, the shelter effectively lured rodents into the facility with open containers of food and gave the rodents a clear path inside by leaving holes in the floors unfixed.

Clifton Animal Shelter did not have a legally required isolation area. Under N.J.A.C. 8.23A-1.9(g), N.J.A.C. 8.23A-1.9(h) and N.J.A.C. 8.23A-1.9(i), a shelter must have a separate isolation area. What did the shelter use instead? A bathroom that the animal control officer claimed had a separate ventilation system. Call me crazy, but I’m highly skeptical that a facility which can’t fix holes in the floor and leaves food containers open would build a separate ventilation system for its bathroom. Regardless of the ventilation system, a bathroom is too small to serve as isolation room and presents other challenges if people also use the bathroom. For example, people coming in and then spreading disease to the rest of the facility. Thus, Clifton Animal Shelter lacked one of the key required features of an animal shelter.

The shelter did not have a scale to weigh animals. This finding confirms my suspicion, which was based on the shelter not listing weights of the animals it killed and euthanized, that the facility did not weigh animals prior to killing animals. Therefore, Clifton Animal Shelter could have easily provided excessive doses of Ketamine, which can “produce convulsions and seizures”, and/or not provided enough Fatal Plus to ensure animals were actually dead. As a result, Clifton Animal Shelter could have easily dumped animals in a landfill or placed pets into an incinerator who were still alive.

Clifton Animal Shelter also was not open the required hours according to the signs on its doors at the time. Under N.J.AC. 8.23A-1.10(b)(1), a shelter must be open at least two hours each weekday and two hours on Saturday or Sunday. However, the shelter’s signs said it was only open one and a half hours each weekday. While the signs on the shelter’s door now indicate Clifton Animal Shelter is open long enough to meet state law requirements, the facility is hardly ever open to adopters. Specifically, the shelter is only open from 6:30 pm to 8:30 pm Monday to Friday and Sunday from 12 pm to 4 pm. In other words, the shelter is only open on average two hours each day. Furthermore, the facility is closed on Saturdays (except for appointments) despite people adopting many animals on this day at other shelters.

Despite all these significant problems plus the shelter illegally killing animals before seven days, the Clifton Health Department remarkably gave Clifton Animal Shelter a “Satisfactory” rating. As regular readers know, local health departments typically are incapable of conducting proper inspections of animal shelters due to incompetence and conflicts of interest. Therefore, a state health department inspection would likely find many more significant problems. 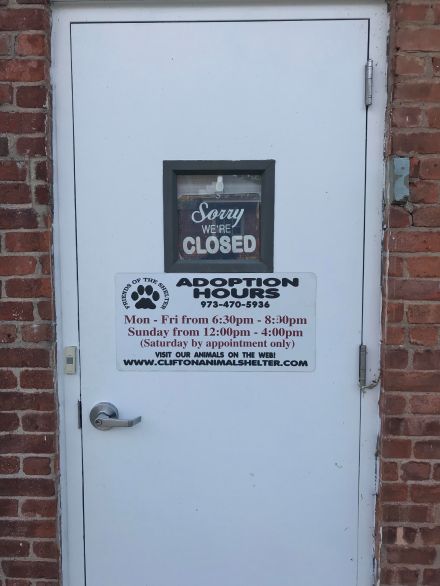 Given Montclair Health Department’s history of missing obvious violations of state law at its town shelter in the past and having no records of legally required annual inspections in 2010 and 2012, one should assume this was a poor quality inspection. 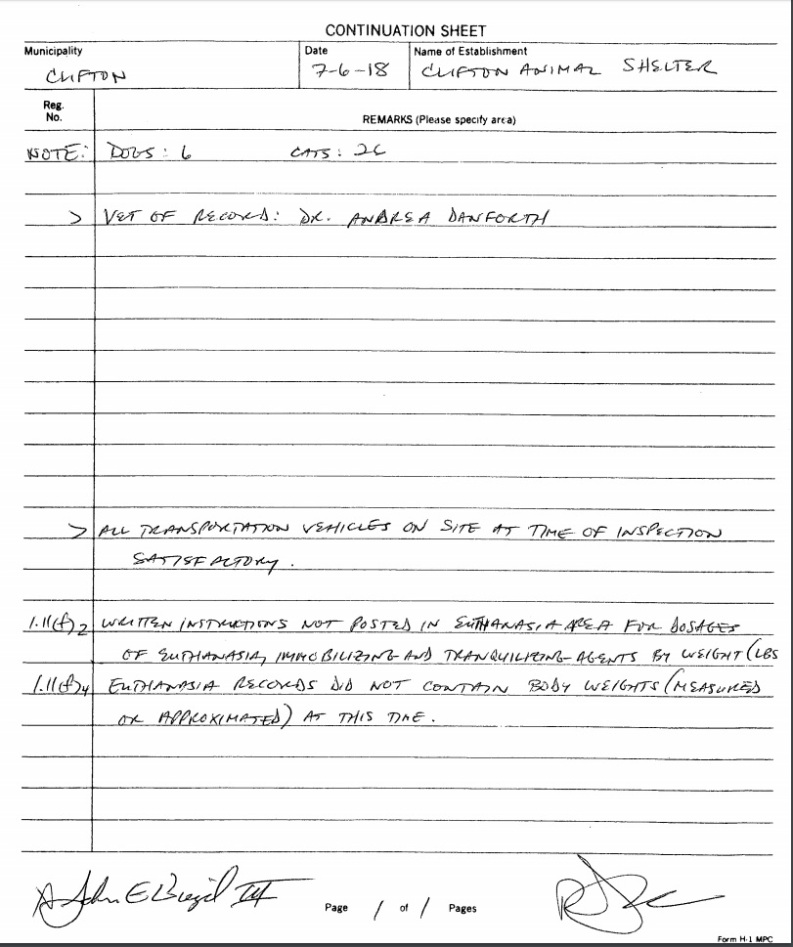 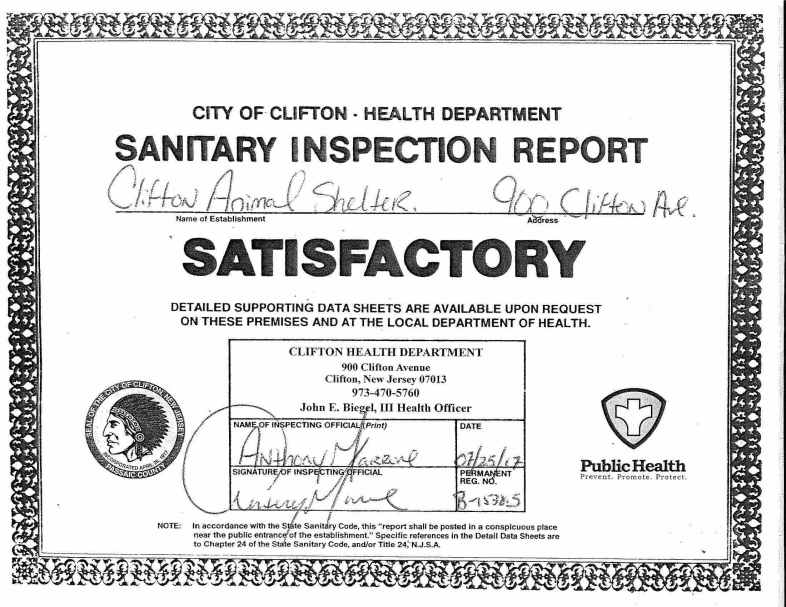 Friends of the Shelter Take Adoption Fees from Animal Shelter

As I discussed in my last blog, Friends of the Shelter is an organization that controls the volunteer program at the shelter and also has the option to save animals Clifton Animal Shelter plans to kill. According to the shelter’s intake and disposition records, a number of these animals remain at the shelter. 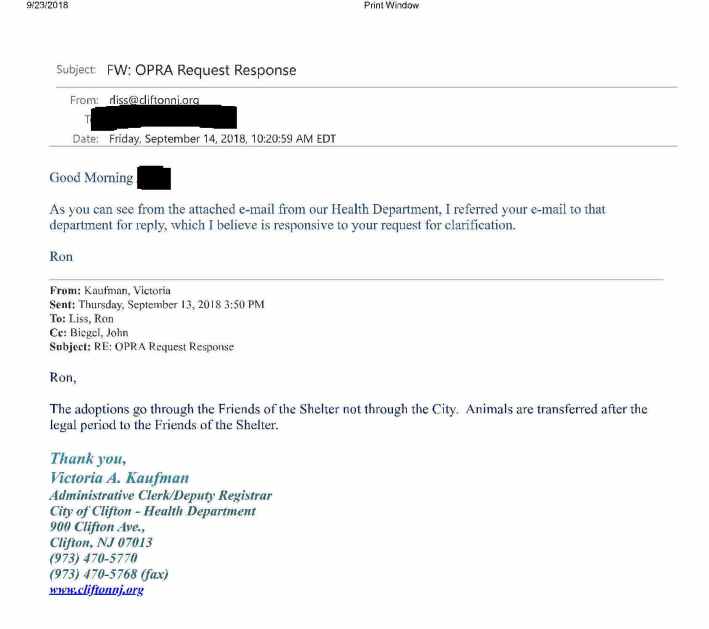 While Friends of the Shelter obviously does some good work, their leadership seems behind the times. For example, I could not find an active Facebook page from this group or the animal shelter itself. While a Clifton Animal Shelter Facebook page exists, its “unofficial” and just has information about the facility and reviews (i.e. animals up for adoption are not posted). In 2018, its shocking that any animal shelter or rescue group would not have a Facebook page.

The saying “a picture is worth a 1,000 words” perfectly applies to the Clifton Animal Shelter. What do visitors see when they enter the door to the shelter? A sign showing the facility is virtually never open and a threat of imprisonment if the person leaves an animal outside the building. Obviously, this is not welcoming to adopters who walk in the door.

Clifton taxpayers are also spending more money per animal than Ewing’s taxpayers on its animal shelter and killing more animals. According to a recent news article, Ewing pays EASEL Animal Rescue League $150,000 per year to run the shelter. When we add this amount to the town’s $104,750 animal control department budget, Ewing pays $254,750 per year for animal control and its animal shelter. Based on EASEL Animal Rescue League taking in 896 dogs and cats in 2017, Ewing pays $284 per dog and cat. As a comparison, Clifton allocated $176,900 in its 2017 budget to its animal control and sheltering operation. Based on Clifton Animal Shelter taking in 589 dogs and cats in 2017, the town had $300 of funding per dog and cat. In 2017, EASEL Animal Rescue League reported only 2% of noneclaimed dogs and 7% of nonreclaimed cats lost their lives. As a comparison, Clifton Animal Shelter had nonreclaimed death rates of 29% for dogs and 19% for cats. Thus, Clifton taxpayers spent more money than Ewing taxpayers on its animal shelter and its nonreclaimed dogs were 15 times and its nonreclaimed cats were three times as likely to lose their lives.

Clifton residents and people who shop in the city should contact the elected officials below and demand the following:

The contact information for these officials is as follows:

Given the relatively small numbers of animals this shelter takes in, it should achieve great things. With your advocacy and persistence, we can make this change happen.