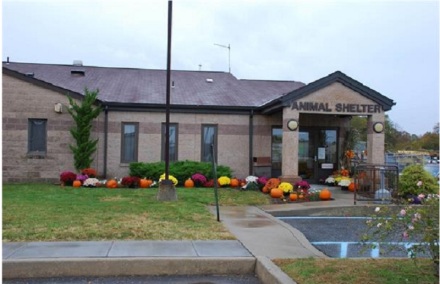 Recently, I wrote a blog discussing decreased killing at New Jersey animal shelters in 2018. This blog will explore the 2018 statistics in more detail and assess the current status of the state’s animal shelters.

I compiled the data from these reports and analyze the results in this blog. 2018 statistics for each New Jersey animal shelter are listed at this link. You can also view each “Shelter/Pound Annual Report” at this link.

Most New Jersey animal shelters do not properly account for their animals. Simple math dictates the number of animals at a facility at the beginning of the year, plus all animals coming in during the year, less all animals leaving for the period, should equal the number of animals a shelter has at the end of the year. Stunningly, 56 out of 92 shelters reporting these dog statistics and 59 out of 91 facilities submitting this cat data failed to get this right. This raises serious questions about the accuracy of these shelters’ reported statistics. 32 of the 56 shelters with flawed dog statistics and 34 of the 59 facilities with incorrect cat statistics should have had more animals at the end of the year than reported. While these errors could have been due to incorrect counts of the number of animals at facilities, these shelters may have not recorded outcomes, such as animals who were killed, died, or went missing. To put it another way, 2,002 cats and dogs should have had outcomes reported and did not. Thus, there is the potential that as many as 2,002 additional dogs and cats were killed, died or went missing from New Jersey animal shelters than were reported in 2018. 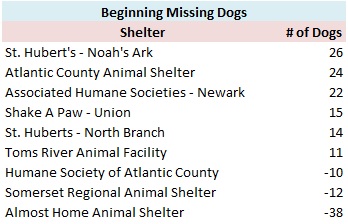 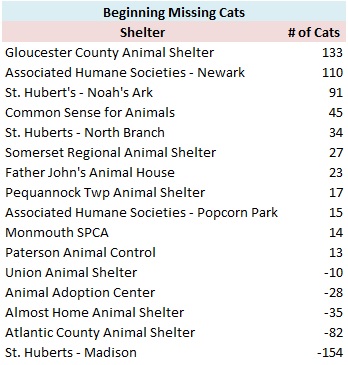 Shelters may have failed to classify animals adopted out and sent to rescues properly. Both Paterson Animal Control and Elizabeth Animal Shelter reported no animals were sent to rescues and all dogs and cats leaving their facilities alive were owner reclaims or adoptions. However, intake and disposition records I reviewed at both of these shelters in recent years revealed almost all “adopted” animals are actually rescued. One has to wonder how many other facilities failed to properly classify adoptions and rescues properly. This data is very important as it provides details on the burden rescues and other shelters are taking on from these facilities.

We need better oversight of New Jersey animal shelters’ data reporting. Currently, these statistics are voluntarily reported and most shelters are not taking this seriously. For example, I noticed a large number of reports were submitted many months after the end of the year. This data should be easy to compile since facilities can utilize animal shelter software programs, some of which are free, to do this task. Furthermore, New Jersey animal shelter laws mandate facilities maintain much of the raw data found in the Shelter/Pound Annual Report. Unfortunately, New Jersey Department of Health inspections routinely find shelters do not properly keep records on animals. We need to make the data reporting mandatory for animal shelters as the shelter reform bill, S725, does along with serious penalties for significant errors (especially if deliberate). In order for animal shelters to take data reporting seriously, we may also need to require audits of these reports. Thus, these results show we need stronger laws and the New Jersey Department of Health to play a greater role in ensuring reported animal shelter statistics are in fact accurate.

Despite the errors in these reports, the data provided still reveals important information.

This year I revised the cat statistics to remove an estimate of the cats St. Hubert’s transfers in and quickly transfers out through its Sister Shelter WayStation program. Previously, I made this adjustment only for dogs. Since St. Hubert’s is effectively acting as a middle man and not holding these animals very long, it makes sense to exclude these dogs and cats from the various kill rate statistics. If I did not exclude these animals, I would understate the dog and cat kill rates due to inflated intakes and outcomes numbers. Therefore, I removed all of St. Hubert’s dogs transferred out from the intake and outcomes figures in the metrics. Since St. Hubert’s primarily uses the Sister Shelter Waystation program to quickly transfer in cats and send them to out of state facilities, I only backed out the cats St. Hubert’s transferred to out of state organizations in the various kill rates. This adjustment increased the dog kill rate (intake) from 5.5 to 6.3% and the cat kill rate (intake) from 16.1% to 16.3%.

The Animal Intake and Disposition report prepared by the New Jersey Department of Health only allows one to calculate the number of animals killed as a percentage of total animals impounded or intake. I prefer calculating the kill rate as a percentage of outcomes rather than intake as this metric directly compares positive and negative outcomes. Using intake may depress the kill rate since shelters can simply hold animals for a long time to the point of overcrowding. Calculating the kill rate based on outcomes rather than intake caused the dog kill rate to increase from 6.3% to 6.4% and the cat kill rate to increase from 16.3% to 16.7%.

To calculate the statewide kill rate, we must also back out transfers from one New Jersey animal shelter to another state facility to avoid counting animals still in the state’s shelter system or registering two outcomes for the same animal (i.e. one New Jersey animal shelter transfers a dog or cat to another state facility which then adopts out the animal). This adjustment increases the dog kill rate from 6.4% to 6.8% and the cat kill rate from 16.7% to 18.0%.

In addition, we should increase the kill rate for animals who died or went missing in shelters. In the past, I’ve labeled this metric the death rate as these animals are likely dead or in a very bad situation. Unfortunately, the Shelter/Pound Annual Report includes animals who died or went missing in the “Other” outcome category. The “Other” category contains positive live releases, such as TNR for cats, at a few shelters. While including the “Other” category in the death rate for most shelters is appropriate (i.e. those facilities that don’t do TNR or don’t include cats released through TNR programs in “Other” outcomes), I’m no longer doing this due to an increasing number of shelters implementing TNR. Instead, I calculated the kill rate by subtracting out “Other” outcomes from total outcomes. If a shelter specifies the number of animals included in “Other” that left the shelter alive, I count this as “Other Live Release” and do not back these amounts out of total outcomes. After making this adjustment, the dog kill rate remained at 6.8% and the cat kill rate also stayed at 18.0%. For those interested in seeing the estimated death rates, you can find them in the supporting spreadsheet.

Also, many shelters transport easy to adopt animals from out of state which artificially increases live release rates. To properly calculate the percentage of New Jersey animals losing their lives, we need to adjust for transports. Unfortunately, shelters don’t break out their save rates by local and out of state animals. However, most likely nearly all of the out of state animals (primarily puppies and easy to adopt dogs and cats) make it out of shelters alive. Therefore, I back out the number of out of state transports from total outcomes to estimate the local kill rate. This adjustment increases the New Jersey dog kill rate from 6.8% to 9.2% and the state’s cat kill rate from 18.0 to 19.3%.

Dogs and cats are likely to lose their lives at a number of New Jersey animal shelters. Shelters with the highest kill rates for dogs and cats (excluding very low intake facilities) are listed in the following tables: 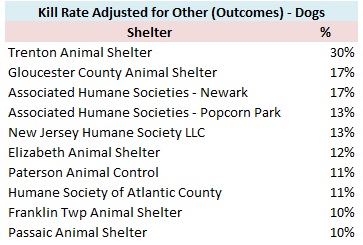 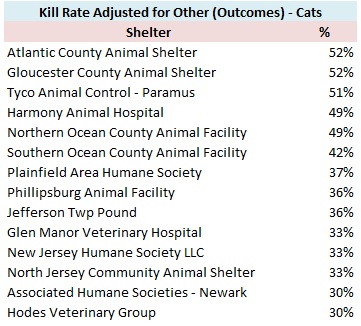 Thus, both dogs and cats have a very good chance of leaving many New Jersey animal shelters dead rather than alive.

In terms of raw numbers, the following shelters killed the most animals: 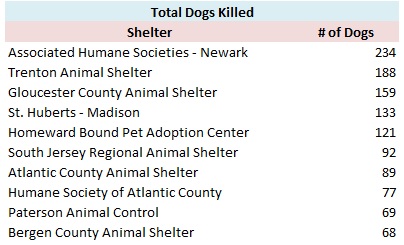 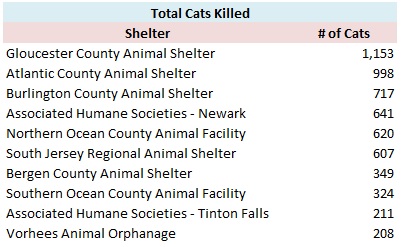 Many shelters fail to account for large numbers of their animals. As discussed above, a shelter’s number of animals at the end of the year should be calculated as follows:

Unfortunately, a large number of shelters take in far more animals than they can explain where they went. Shelters having the highest numbers of unaccounted for dogs and cats are listed in the following tables: 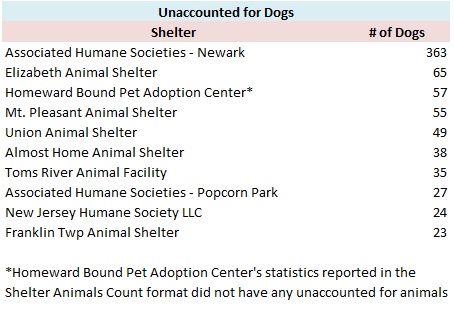 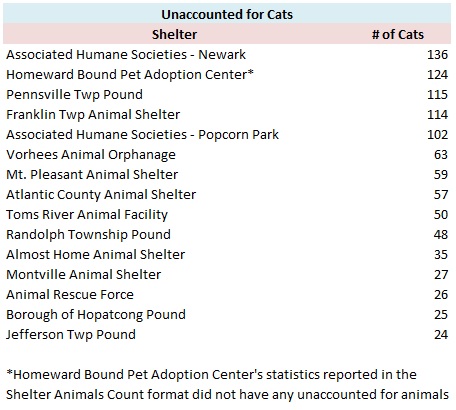 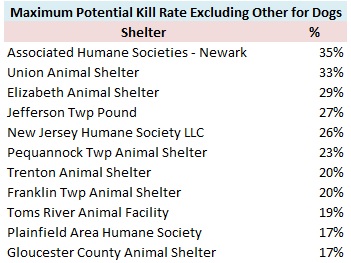 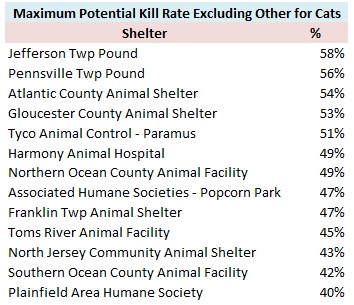 Thus, the plight of dogs and cats may be far worse in New Jersey animal shelters when we consider the unaccounted for animals.

While perhaps some shelters, such as Animal Alliance in Lambertville, take animals from nearby New York or Pennsylvania animal control shelters, the overwhelming majority of these dogs most certainly came from down south. In fact, New Jersey animal shelters transported more dogs from out of state than dogs who were killed in New Jersey animal shelters. This number does not include additional out of state dogs transported into New Jersey by rescues operating without a physical facility. Shelters transporting the most dogs from out of state were as follows: 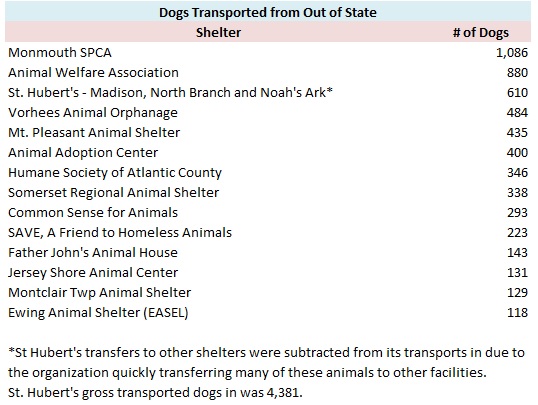 Since dogs reclaimed by their owners typically have licenses and/or microchips and quickly leave the shelter, its informative to look at dogs shelters have to find new homes for. To get a better idea of how organizations are doing with animals they actually have to shelter, I also examined what percentage of non-reclaimed dogs lose their lives at each facility. Shelters with the highest non-reclaimed dogs kill rates are as follows: 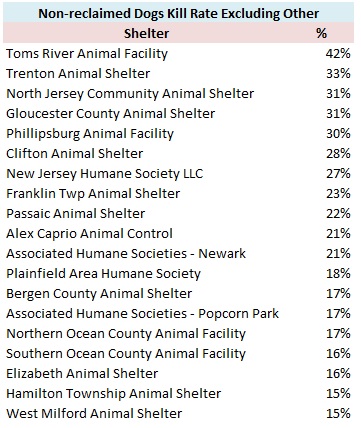 Shelters with the highest maximum non-reclaimed dogs kill rates are as follows (excluding facilities that reported transporting many dogs in and taking very few animals in): 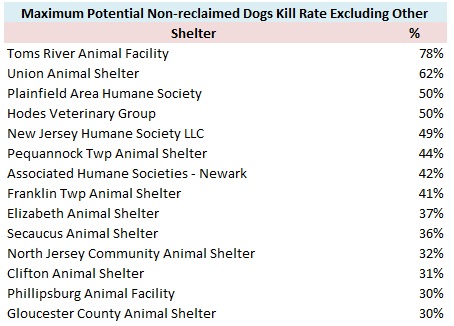 New Jersey animal shelters fail to use their space to save animals. Based on the average number of animals at all of New Jersey’s animal shelters at the beginning and the end of 2018, only 62% of dog and 75% of cat capacity was used. Given December is a low intake month, I also increased these populations to an average intake month. This adjustment only raised the dog capacity utilization to 70%. While this adjustment did increase the cat capacity utilization to over 100%, it is highly unlikely this happened in reality. Shelter inspection reports I’ve reviewed often did not reveal significantly larger dog and cat populations in the summer and winter months. This is likely due to the influx of highly adoptable kittens having short lengths of stay and shelters killing cats with empty cages.

Many animal shelters with low kill rates failed to rescue animals with their excess space. Additionally, other shelters used little of their available space and still killed a large percentage of their animals. Some examples after increasing the population (and therefore capacity utilization) based on the adjustment discussed above are as follows:

Thus, many New Jersey animal shelters are killing dogs and cats despite having ample space to house these animals.